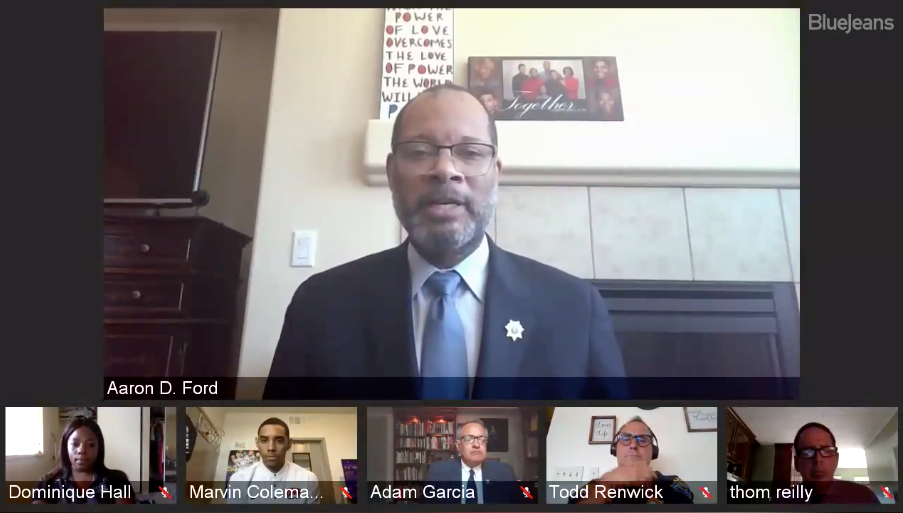 Conversations about police brutality and systemic racism are continuing after the killing of George Floyd. The Nevada System of Higher Education (NSHE) is responding by making modifications to its campus policing and having conversations about discrimination on university campuses. During a NSHE town hall on these matters, Nevada Attorney General Aaron Ford said the time for action is now.

In an open dialogue about race discrimination and policing practices, NSHE Chancellor Thom Reilly was joined by four panelists: NSHE’s northern and southern directors of Police Services and two students, a member of the UNLV basketball team, guard Marvin Coleman ll, and president of the Associated Students of the University of Nevada, Reno (UNR), Dominique Hall.

Hall didn’t waste any time addressing the changes she would like to see, including campus police requiring more de-escalation strategies.

“Maybe on college campuses, police officers leaving their gun in their car is a good idea to de-escalate things, and I think police departments need more cultural competency training so that we can have less of these racially biased incidents happening,” Hall said. “Lastly, certain practices such as knee grips and knee holds that are putting bodily pressure should be changed.”

Hall was one of the several Black student leaders to create “Listen to Us,” an action plan directed at local university leaders. The request lists several goals, which the University of Nevada, Reno is vowing to uphold, including a public review of policing standards and the African Diaspora Program that replaced the Black Cooperative Program at the university. The students are also calling for recognition to celebrate Black social justice pioneers like Colin Kaepernick on campus.

Todd Renwick, the director of university police at the University of Nevada, Reno, said he is questioning his own role in law enforcement. He said the traditional way of policing is not working anymore.

Along with a partnership with the School of Social Work, the department is looking to have access to different mental health experts as alternative ways to respond to nonviolent police calls.

UNLV guard Marvin Coleman II said structural change needs to happen, but for him, he hopes people can simply start respecting one another so that people of color can feel safe walking down the street without fears of being discriminated against.

“I just want people to have an open mind. To just look at people as people, not as ‘this is a Black person,’ or ‘this is a Hispanic,’ or ‘this is a white person.’ Just people, because at the end of the day, we’re all the same. We’re all born the same way in a hospital. There are obviously differences, but there are a lot of similarities in everyone,” Coleman said.

Hall and Coleman expressed appreciation for the conversation, but both agreed, it’s time to make real change and so did Nevada Attorney General Aaron Ford.

Ford went on to say this is a crucial time to act on a fair criminal justice system and police reform, including implementing a policy that holds officers accountable if they do not intervene if they see another officer acting unjustly.

“If cops started getting kicked out of their positions, if they start losing their jobs because they don’t intervene when they see somebody’s rights being violated, then we would start seeing some changes take place,” Ford said.

This article is part of our collaboration with local public radio station, KUNR. The original version was published on July 8.