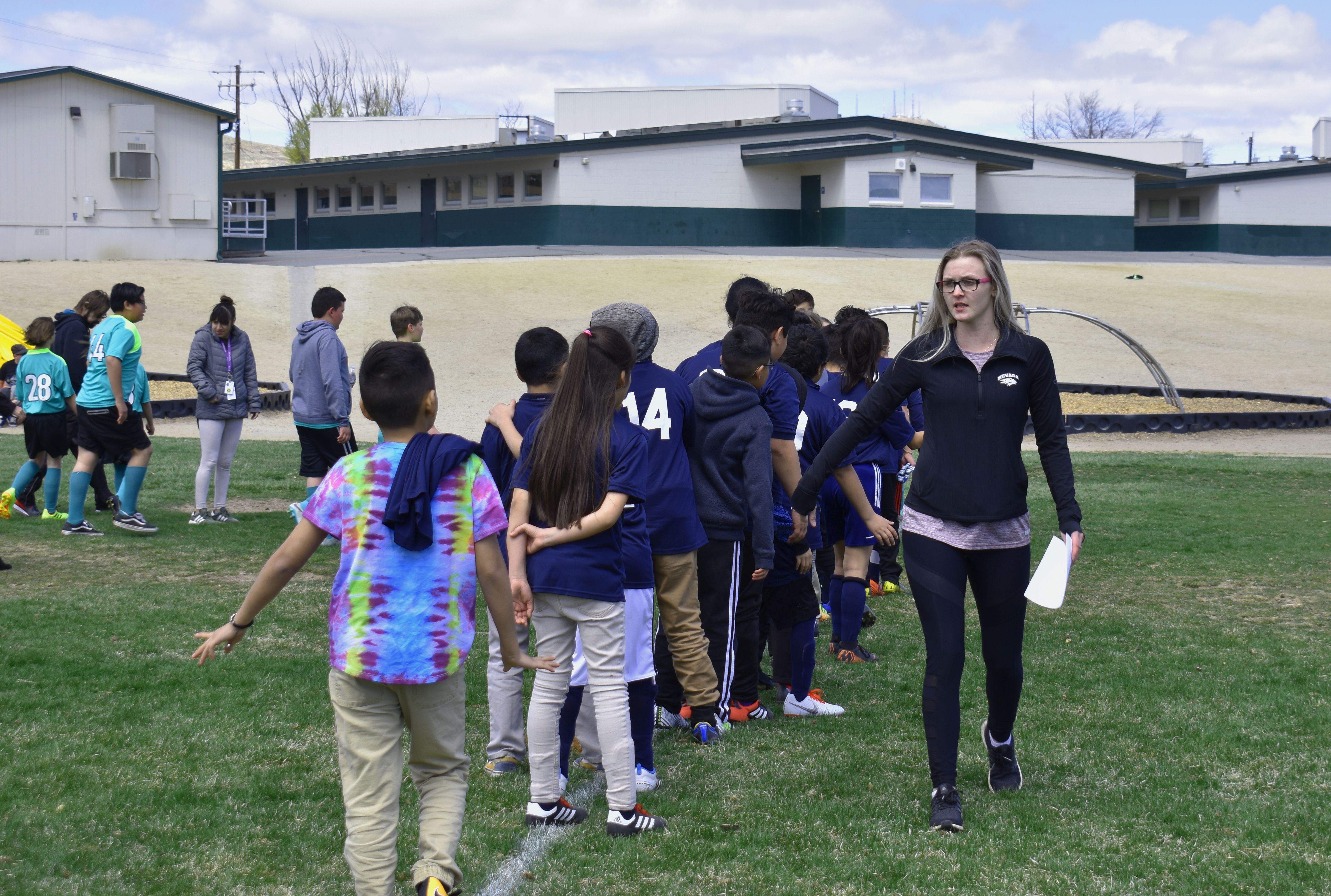 University of Nevada, Reno student, Haley Frisella, high-fives the Glenn Duncan players after their first win of the soccer season.

Nevada has recently seen more youth suicides under the age of 18. Last year, there were 27 of these deaths, compared to 15 the year before. KUNR’s Karina Gonzalez examined this growing problem and recent prevention efforts.

Suicide is the second-leading cause of death for young Nevadans between the ages of 10 and 24, and Nevada has the third highest youth suicide rate in the country, according to a local health assessment. 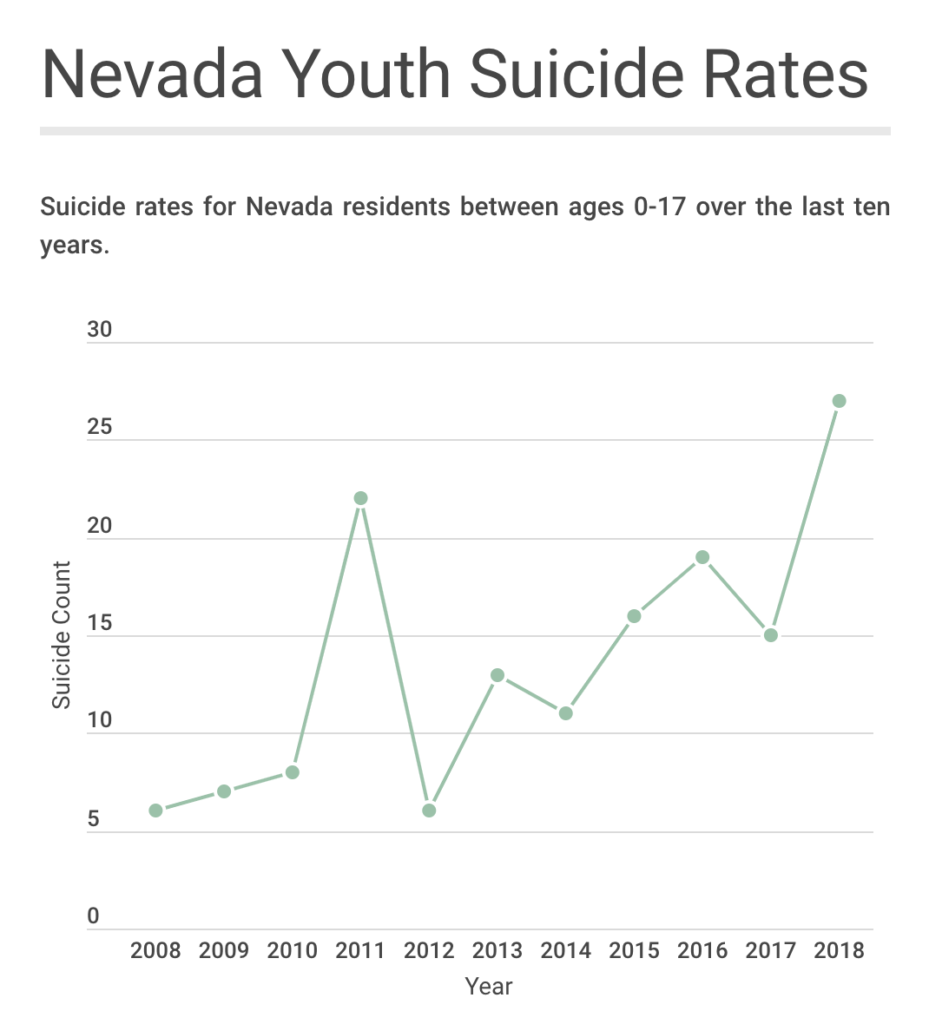 This data is from the Department of Health and Human Services Office of Analytics. Graph made by Infogram.

Misty Vaughan Allen is the suicide prevention coordinator for the state. She says it’s still too soon to tell what might be causing more young people to take their lives.

“There’s never a single issue and for youth suicide – the reasons people might have thoughts or make an attempt are extremely complex,” said Vaughan Allen. “From family environment to school environment, to the community climate and everything happening in our culture right now could be impacting their risk factors.”

In Washoe County, more than a third of high school students report feeling sad or hopeless.  That’s according to the 2017 Nevada Youth Risk Behavior Survey, conducted by the Centers for Disease Control (CDC) and the University of Nevada, Reno.

One way the Washoe County School District is addressing this issue is by mandating what’s known as the Signs of Suicide (SOS) Prevention Program for seventh graders.

“A lot of support can be given by recognizing early on, that early identification when the youth is having challenges, and reaching out and offering support,” said Vaughan Allen. “We don’t have to wait till that crisis begins, and far too often we are missing those invitations for help until the crisis.”

Nathan Holland is the SOS Prevention Program coordinator in Washoe, organized by The Children’s Cabinet.

“Depression and suicide, we’ve seen it in, you know, low economic Hispanic children. We’ve seen it in high economic white kids. So, it goes across all borders for the most part,” said Holland.

The program is funded by the Washoe County Health District and consists of two parts. First, students must go through mandatory video education and then through a screening process that requires parental consent. It consists of seven questions related to the student’s emotions and behaviors.

Holland explained that once students go through the screening, they are placed into low, moderate and high-risk categories. Each category has a different response for follow-up care.

Along with SOS, the state has implemented a program called SafeVoice. Students are able to report bullying, threats of violence, risk of suicide, and more via a website, hotline or app.

Outside of these efforts, work is being done with younger kids to help them get active, which is linked to combatting depression.

Haley Frisella is a student at the University of Nevada, Reno who interns for the Mindful Health Initiative, a nonprofit that supports the wellbeing of at-risk youth through mindful, physical activities. She and other student interns help coach soccer for a group of about 20 students at Glenn Duncan Elementary School.

“A lot of them don’t get to play sports outside of this, and so then by them being active they’re able to release a lot of those things that I think they build up.”

One fifth grade student, Mariana Moreno, said that being part of this soccer team has helped boost her confidence.

“It’s like coming home and saying you’re on a team and you’re like really happy inside,” said Moreno. “And you then come home winning and you feel like I’m better than I was before and stuff. You feel like more confident in yourself. 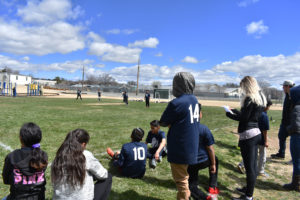 Jessie Koltz is a counseling PhD student at the University of Nevada, Reno, and runs the Mindful Health Initiative with her team of interns.

“I’ve worked with students that don’t have the means to provide after school activities, go and be a part of other things in the community,” said Koltz. “I saw the need for more physical activity. There’s a lot of schools that don’t offer P.E., [and] don’t offer art programs like what I was exposed to growing up.”

Jessie Koltz started the Mindful Health Initiative last year and has been working with K-12 students to practice being in control of their emotions. 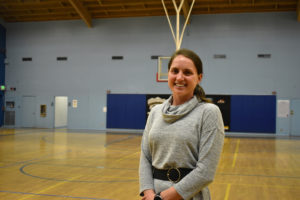 Jessie Koltz is a counseling PhD student at UNR. She started the Mindful Health Initiative last year to help at-risk youth get active. 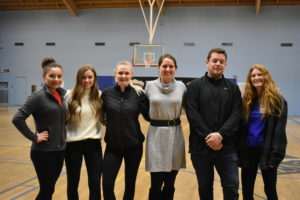 Koltz has five interns on her Mindful Health Initiative team who are students at UNR. The interns help Koltz organize the sports programs.

“Nutrition, exercise and sleep are really crucial that we can work on immediately, but also mindfulness and meditation – finding those healthy people in your life to communicate with face to face is really important too,” said Vaughan Allen. “So, it’s building that list of activities when you are starting to feel depressed or anxious”.

Koltz said she has seen students benefit from the before and after-school programs.

“I think it’s just important for them to know that they’re not alone,” said Koltz. “Even though they might feel it, you know in their immediate family or whatever may be going on – maybe in their school setting in the classroom, or maybe they’re being bullied or isolated – just having them come to a place that’s safe.”

Karina Gonzalez is a senior at the Reynolds School of Journalism and works for Noticiero Móvil, a Spanish-English multimedia news outlet for Northern Nevada.