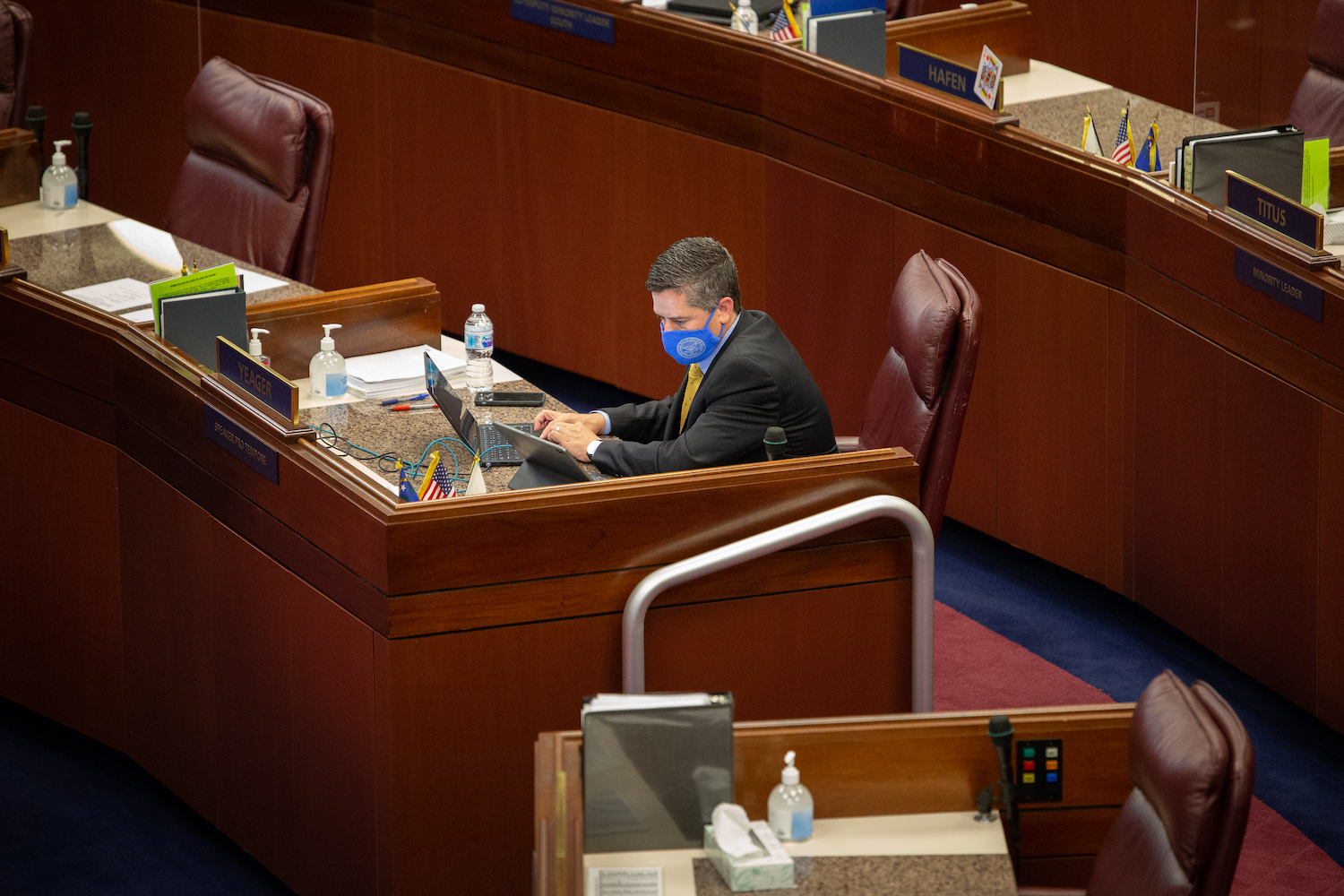 Assemblyman Steve Yeager works on a budget to address the pandemic-caused deficit on the fifth day of the 31st Special Session in Carson City, Nev., on Monday, July 13, 2020. Trevor Bexon/Nevada Independent

KUNR’s Lucia Starbuck looks into how this will impact Medicaid recipients and frontline workers.

Jennifer Cantley of Indian Hills is a mom of three young boys. She’s active in her community and coaches her sons in soccer, which can be difficult, considering all four of them have asthma.

She says before her family was enrolled in Medicaid, she would shell out hundreds of dollars a month just for the inhalers.

“I want to say they were close to $200 each because my insurance didn’t really cover them that I had at the time,” Cantley said. “I would just buy one inhaler and kind of have it for all of us.”

Cantley is just one of the roughly 688,000 Nevadans who use Medicaid, the public health coverage program for low-income Americans.

The Division of Health Care Financing and Policy is housed under the Nevada Department of Health and Human Services. Like every state agency, the department as a whole must reduce its $1.4 billion budget by 14 percent, as required by Governor Steve Sisolak.

That means, the Division of Health Care Financing and Policy is facing roughly $140 million in cuts.

Those services are considered optional because the federal government does not require the state to provide them, but Department of Health and Human Services Director Richard Whitley says many Nevadans rely on them.

And that’s a concern for healthcare providers. About 36% of low-income adults have delayed treatment for a serious condition in the United States, according to a Gallup poll from last December.

“The likelihood of them needing more services in three months is going to be a lot higher, costing the state more money,” Cameron Duncan with the Nevada Advanced Practice Nurses Association said.

It’s not just individuals and families that’ll be affected. The cuts will also impact healthcare providers, mostly in the form of a 6% reduction to Medicaid reimbursements. In other words, the state will start reimbursing healthcare providers who treat Medicaid patients at a lower rate next month.

Along with cuts to Medicaid, the governor’s proposal also includes eliminating nearly $20 million from the Division of Public and Behavioral Health, which oversees mental health services in the state.

Those cuts may limit the amount of money the state pulls in from the federal government, further compounding the impact on a state that already spends less on public health than almost any other.

Lucia Starbuck is a corps member with Report for America, an initiative of the GroundTruth Project, and this story was produced by KUNR in partnership with This Is Reno. This article was shared with Noticiero Móvil as part of our partnership with KUNR.