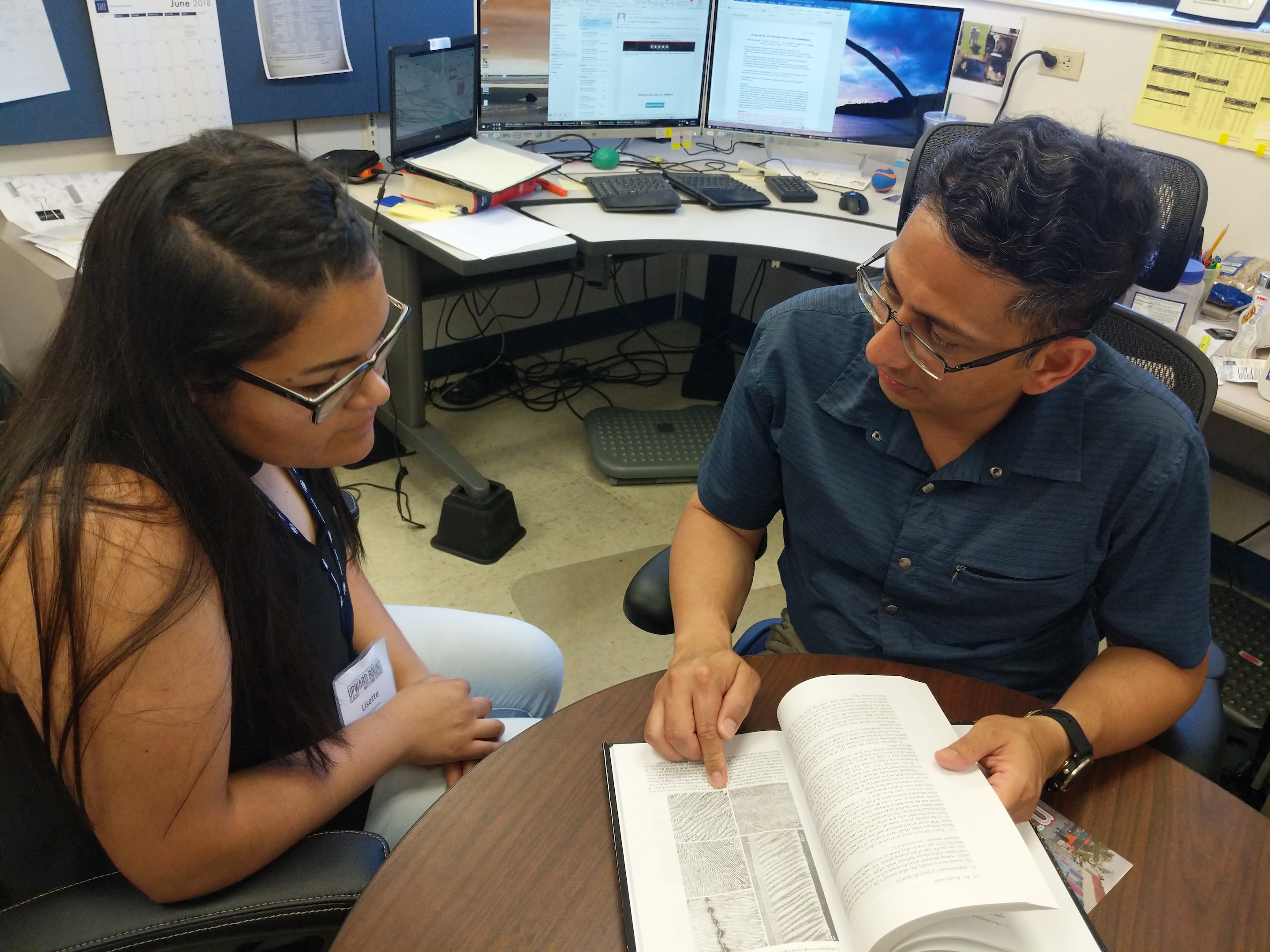 June 26, 2018: Due to my limited exposure to engineering, I wasn't sure whether I was capable of pursuing a career in engineering. After this interview, Dr. Pathak taught me that anyone can enter the field of engineering, as long as they are motivated enough to overcome the struggles placed in their paths.

I have always known that the University of Nevada, Reno has a phenomenal engineering program, but I never had the chance to talk with a professor or student studying in the program until now.  I am the only one in my family with plans to pursue at least four years of higher education. With no one who can expose me to the world of engineering, I felt clueless and lost. When my Upward Bound internship mentor, Vanessa, asked me to find someone I could interview about engineering, I was scared and nervous to conduct the interview, but also intrigued and curious as to what could happen. I knew the chance to interview a professor would change my life and influence my thinking, so I couldn’t let this opportunity pass.

Browsing through Nevada Today, an article about Dr. Sid Pathak and his collaboration with students on carbon nanotubes (CNT) immediately caught my eye. This extraordinary project is going to grace the moon in the coming months and I knew I had to learn more about it. I spent some time researching what I could about the CNT project and how it is going to the moon with Carnegie Mellon’s Moonark project. Mixing in a few questions I had about the CNT project and some questions about engineering in general, I knew I had a strong interview, and I was one step closer to conducting it.

I contacted Dr. Pathak and was astonished when he replied quickly; I knew this was real. I was going to interview an engineer and I would learn a ton of new information that would help me learn more about the potential field of study that I am interested in. I spent about a week preparing for the interview and as each day passed, my anxiety grew. To be completely honest, I was a mess before the interview because I feared I would embarrass myself with my little knowledge of engineering, specifically materials engineering. Anxious as I was, I knew I had to clear my mind before going into the interview because this was a learning opportunity I knew I would benefit from.

I don’t know why I was so worried about the interview because after the fact, I thought to myself, “You know, this wasn’t as bad as I had imagined.” Dr. Sid Pathak was a kind man who is passionate about his work, a trait I greatly appreciate and aspire to be in the future. Throughout the interview, I learned how Dr. Pathak grew up in a family of medical doctors, but as an engineer, he is still able to conduct medical research, like a project he is currently working on concerning dental materials – specifically dinosaur teeth! He also let me know that all engineering does not involve math, which surprised me because I have always been told one must have a strong math and science understanding to do well in engineering. Also, I never really considered engineering to be anything medical, so I knew right from the start I would be gaining a variety of knowledge and opening my mind to new perspectives.

The interview taught me so much about engineering and about the relationship between students and professors. I love that Dr. Pathak mentioned how the students drive the projects because it highlights the collaborative nature of students working with professors to attain the results they want, and it is a learning process for both parties. Student collaboration is important because each student comes from a different background, whether it be difference in culture, race, or community, and they have so much to share with others.

One thing that stuck with me was when Dr. Pathak mentioned that although diversity in race and gender in engineering is important, the inclusion of diversity in background is crucial.

In the same way Dr. Pathak grew up in a family of medical doctors and I grew up in a family where I will be the first to obtain a four-year degree, we both come from different backgrounds and have learned how to problem solve and think in different ways. When the mention of diversity pops up, many often look towards different races, genders, and sexualities, but diversity in backgrounds is rarely considered. We all grew up differently and after my meeting with Dr. Pathak, I knew that the differences in how we grew up can affect the perspective we have when working on projects.

Science and engineering are often topics that don’t easily interest individuals or are seen as difficult or boring. Dr. Pathak mentioned that he portrays science as an art. It may seem far-fetched and unreal, but the discoveries in science can create the most beautiful images and they can lure in a new audience. Looking at science in a different perspective, especially an artistic one, can show people that science isn’t just about difficult theories and complex equations, it is something extraordinary and beautiful, made for anyone to pursue.

This interview opportunity wouldn’t have been made possible without the support and encouragement of my mentor, Vanessa Vancour. She guided me through the interview process and helped me when actually giving the interview, something I will never forget. Of course, none of this would be possible without Dr. Sid Pathak who gave his time. Dr. Pathak was extremely welcoming and taught me things I never expected to learn.

This experience was one of the greatest learning opportunities I have ever had the chance to participate in, and even if I don’t pursue engineering immediately after high school, I know that the engineering career will always be available to me and many other generations of individuals who want to change the world.