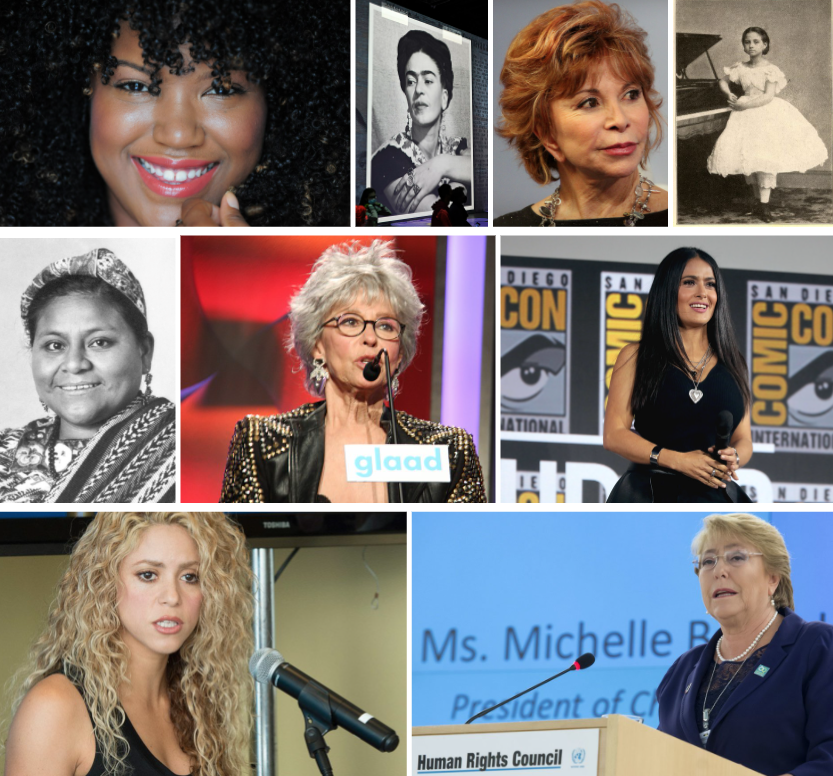 On March 8, the struggle of women around the world and their participation in society, equality, and defense of their human rights is commemorated internationally. This day, which was previously known as “International Working Women’s Day,” has been renamed “International Women’s Day.”

Women are more than just pretty faces: they are smart, kind, resourceful, brave, and more. For this reason, we chose to highlight these 10 Latina women that are worth knowing more about.

Rigoberta Menchú, a Guatemalan and indigenous leader, is recognized worldwide for getting involved in various social causes and denouncing different inequalities in her country in international forums and for always defending the rights of minorities.

Menchú is a human rights activist, goodwill ambassador for UNESCO, and a contributor to the elaboration of the Declaration on the Rights of Indigenous Peoples at the UN. In addition, she’s the winner of the Nobel Peace Prize in 1992.

Upon winning this recognition, Rigoberta commented: “I consider this Prize, not as a reward to me personally, but rather as one of the greatest conquests in the struggle for peace, for Human Rights and for the rights of the indigenous people, who, for 500 years, have been split, fragmented, as well as the victims of genocides, repression, and discrimination.”

It should be noted that she was the first indigenous woman to receive it.

Today, Rigoberta continues to fight for indigenous rights. She is a voice for all indigenous women who want equality.

Her real name is Rosa Dolores Alverío, but in the world of stardom, this Puerto Rican woman is better known as Rita Moreno. Throughout her artistic career, she has been an actress, singer, and dancer. Apart from being in the industry for more than 70 years, Rita has won the four most important awards in American entertainment: Oscar (1962), Grammy (1972), Tony (1975), Emmy (1977, 1978); in addition to being the first Hispanic woman to receive an Oscar.

Few know that Rita is an activist who fights for Latin rights and women’s equality inside and outside in the entertainment industry.

In her documentary, she not only talks about her glamorous career, but also the struggle she had to obtain it. “Wear your nationality like a flag, be proud of it,” she said.

Shakira Mebarak is a singer and dancer of Colombian origin known worldwide as the “Queen of Latin Pop,” with a career that spans more than 30 years. She is one of the most awarded Latin artists of all time with a total of 700 nominations  of which she has won 428 and which includes three Grammys.

The Colombian not only stands out for her magnificent voice and spectacular way of dancing, but also for her charisma and her way of being so sweet. Due to her compassionate personality, she was named by UNICEF “Goodwill Ambassador.”

This recognition was granted in 2003 and today she continues to participate in the protection of children.

“Today’s babies will drive tomorrow’s businesses. Their capacity to contribute will shape tomorrow’s societies and solve tomorrow’s problems,” she said.

Michelle Bachelet is a Chilean politician who was president of her country twice.

She is the first female president of Chile, but also the first South American woman elected to the position where her political career is not linked to that of her husband.

Her campaigns focused on solving the social problems of the country, among these were the rights of women and the rights of indigenous populations in Chile.

It should be mentioned that she is not only an important political figure, she was also the first director of UN Women in 2010.

“It’s time to put those dreams into action! It is time to start together on that path towards a developed and fair, modern and tolerant, prosperous and inclusive nation that we all deserve!” she said during a speech upon assuming the presidential command in 2014.

The Mexican Salma Hayek is one of the most recognized Latina actors in all of Hollywood — but she is not only a great actress; she’s also a businesswoman and producer.

The list of films that Hayek has made is long. Since the beginning of her career she has taken advantage of any role given her and has learned a lot from each one of them; although it was not easy, the vast majority of producers told her because of her accent the only roles she would get be as a prostitute or drug trafficker.

The only thing the actress did was improve and due to these prejudices, she actively participates in campaigns against the abuse of women. A clear example was when Salma launched the #StandWithWomen campaign to combat violence against women during the coronavirus lockdown or CHIME FOR CHANGE, an initiative to promote education, health, and justice for girls and women around the world.

When once asked how she became an activist, Salma Hayek rightly replied: “It’s a very strange question. My head thinks: Why don’t you?'”

Carolina Contreras is a Dominican woman who is a social entrepreneur who speaks about the importance of representation. She’s also the creator of Miss Rizos.

At first, Contreras only had a blog where she wrote about curly hair care called “Miss Rizos.” Shortly after, the blog became a social media movement celebrating, empowering, and educating curly-haired women around the world. In 2014, she opened her beauty salon that bears the same name as her blog and her influence only grew.

She is a woman who is passionate about social change and wants to make a change in the world one curl at a time.

“I think as Black people and Black women, we are taught since we’re very little that we came broken and so we got to be fixed. But why do you have to fix something that was never really broken,?” she said.

Miss Rizos has become a social company and it is expected that she will continue changing any stereotype about “bad hair,” to where self-love and care are the main things.

Frida Kahlo was a Mexican artist recognized worldwide as one of the most influential Latina painters for her works that deal with themes such as identity, the human body, and death; apart from its striking and vibrant colors. The vast majority of her works were self-portraits in which she displayed her suffering and her life.

The artist is fondly remembered in Mexico for embracing her culture with each of her works; in addition, to always having a dedication for her art.

“I used to think that I was the strangest person in the world, but then I thought that there are so many people in the world. There must be someone like me who feels weird and has flaws the same way I do,” she’s been quoted as saying.

Determined, strong, and brave woman; that was the Mexican artist Kahlo.

Dolores Huerta is one of the most influential activists of the 20th century. She is co-founder of the United Farm Workers Association, an organization in charge of improving working conditions for agricultural workers.

The community activism of her mother, Alicia, and the discrimination she suffered in her childhood helped shape Huerta’s entrepreneurial and independent personality in advocating that all people deserve a dignified life.

She led different strikes and protests where they were decisive for the protection of the most vulnerable people. Due to her different acts in favor of human rights, Huerta is the winner of different awards, one of them being the Eleanor Roosevelt Human Rights Award in 1998.

“We must use our lives to make the world a better place to live, not just to acquire things. That is what we are put on the earth for,” she said.

Isabel Allende is a Chilean writer, author of different books that have sold 73 million copies and have been translated into 42 languages. She is considered the most widely read Latina writer in the world.

She has several awards and distinctions among them: the Mulheres Award for Best Foreign Novel and the National Literature Award of her country in 2010. In addition, she has been a member of the American Academy since 2004.

We must emphasize that among so many awards there is one that is not about her books and that is the Medal of Freedom which is considered the highest honor in the USA for civilians. She is also the founder of the Isabel Allende Foundation which promotes and preserves the fundamental rights of women and children to be empowered and protected.

“I like people who have to fight to get something. Those who, having everything against them, get ahead. These are the people that fascinate me. Strong people,” she said.

Teresa Carreño was a Venezuelan pianist, singer, and composer during the 19th and 20th centuries. Some experts refer to her as one of the most important pianists and composers in Latin America due to how unusual it was to see a woman dedicated to music professionally in her time.

The famous Venezuelan pianist was not only known for her incredible way of playing but also because she was a woman of great power and spirit. Her audience called her the “Valkyrie of the piano.”

She gave concerts in the United States, Cuba, and a bigger part of Europe, becoming extremely well-known around the world. But one of the most outstanding was when she was just beginning her musical career and she starred in a musical evening at the White House as a guest of President Abraham Lincoln.

She was so good that many of her fellow musicians said, “you are a pianist, Teresita, and not a female pianist,” something Teresa always protested. But those comments did not stop her in her musical career which lasted more than five decades.

Editor’s note: This article was contributed to Noticiero Móvil by student Daniela Gómez