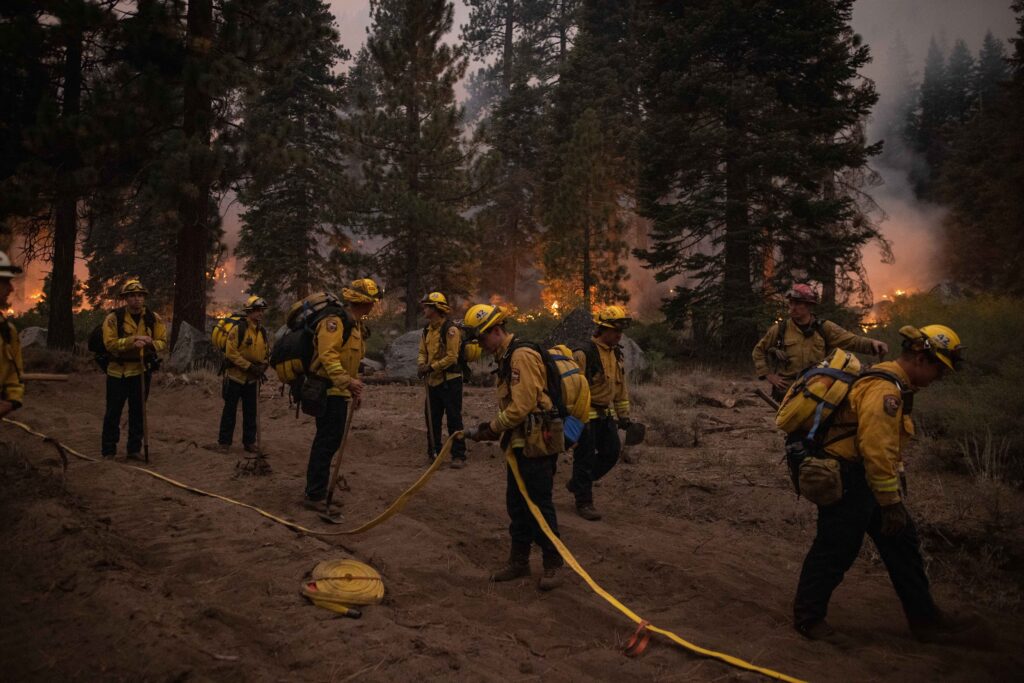 Firefighters with CalFire prepare a hose lay to protect nearby structures near Meyers, Calif. on Tuesday, August 31. Photo by: Christian Monterrosa

The wind whipped ash around in Carson City on Tuesday afternoon as Carlos Arce laid his hand on the bed of a white pick-up truck. The day before, Arce evacuated from South Lake Tahoe with his four children. He stood by the truck with his father, visiting from out of the country, in the parking lot of the Carson City Community Center, a shelter for evacuees.

“I’m feeling sad,” Arce said. “We lost almost everything. When I think of the mountain, it was beautiful. Now the fire is destroying everything, everything I know.”

An evacuation unprecedented in scale. A devastating fire making a steady march toward the town. Another challenging moment in a summer that has seen many, as one fire after another, driven by extreme weather and drought, have threatened communities in the northern Sierra. In some cases, blazes like the Dixie Fire have flattened small towns, with few resources to rebuild.

Arce has lived in Lake Tahoe for about two decades. He recounted working at Sierra-at-Tahoe, a ski resort along Highway 50 that was hit by the Caldor Fire, the intense blaze threatening the lake’s southern and western landscapes. On Monday, photos showed snow machines at the resort being repurposed to fight the fire. These measures and others have helped fend off flames.

But all of these fights come with a sadness, and an uncertainty about losing a special place.

As with other South Lake Tahoe residents who evacuated this week, Arce is hopeful he can return home. But the scope of the evacuation orders, which apply to all of South Lake Tahoe and neighboring lake communities in Nevada, give him pause. What is going to happen next?

By Tuesday afternoon, the Carson City evacuation center was at full capacity, as was the Red Cross outpost in Gardnerville. Evacuees were being directed to the Reno-Sparks Convention Center. The Lyon County Fair Grounds and Dayton Event Center are open for camping.

The Lake Tahoe Basin, straddling the California and Nevada border, is a lot of things to a lot of people. South Lake Tahoe has a population of about 20,000 residents, a size that swells each weekend with tourists. As the COVID-19 pandemic set in and remote work became an option for some employees, residents from big cities, including San Francisco, moved in.

Meanwhile, full-time residents, many who provide essential services to the community, felt the squeeze from the same economic issues facing other Western mountain towns whose economies rely on a delicate balance of attracting tourists and part-time residents — while supporting local residents.

Despite the mansions, private buoys and pristine boats, the median household income for South Lake Tahoe is $49,390, lower than what it is for other parts of California. When fire officials made the call to extend a mandatory evacuation across the town, it was a strain for many residents. Not everyone has money for gas, let alone a vehicle, to drive to Reno and stay there for weeks.

This portion of the article is shared as part of our collaboration with The Nevada Independent. This story was originally published on September 2, 2021, and written by Daniel Rothberg.