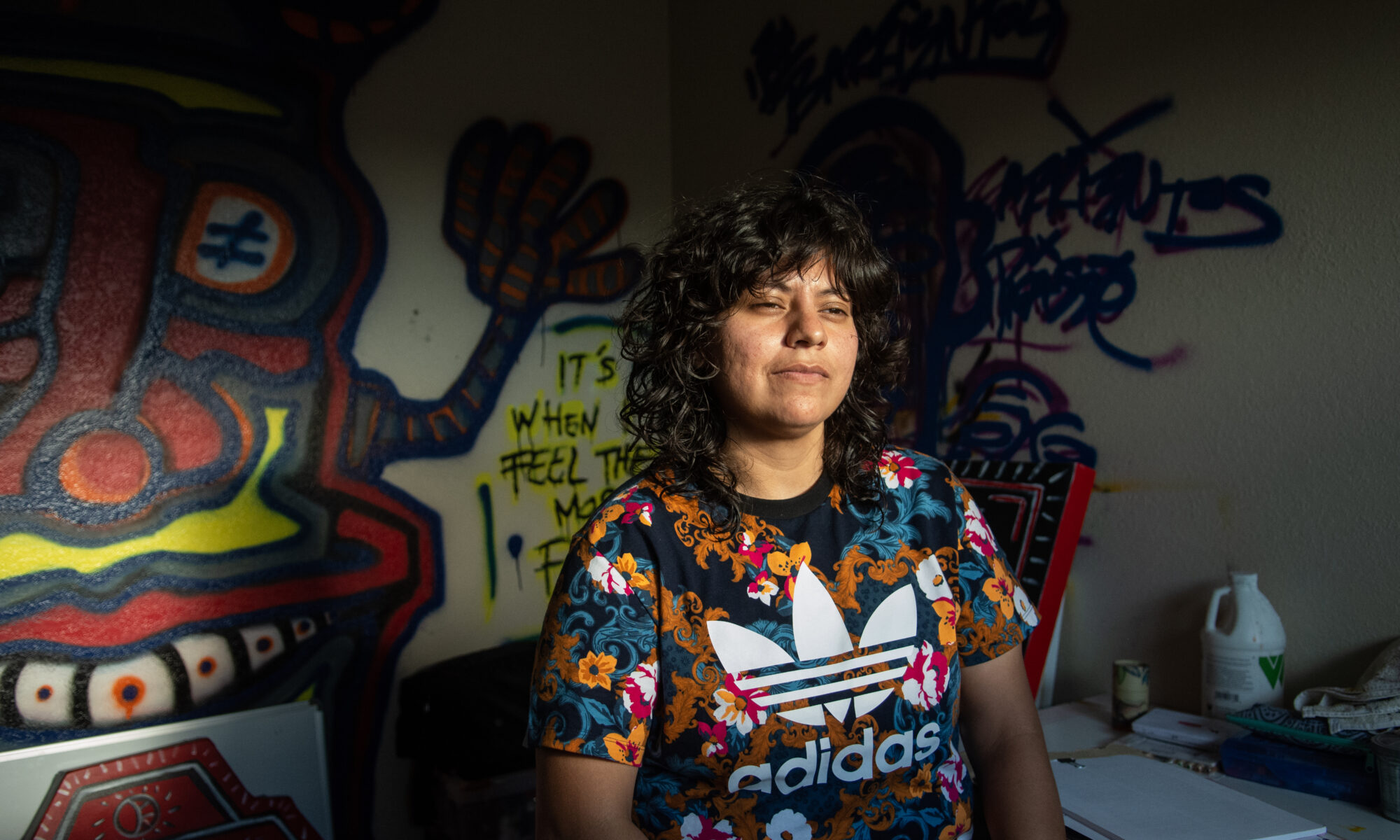 Ruby Barrientos poses for a portrait inside her home studio on July 28, 2021. (David Calvert/The Nevada Independent)

Old photographs of her childhood scribbles decorating the walls of her home are proof that Ruby Barrientos knew, even at an early age, that she was born to create.

In her teens, Barrientos realized she needed art to “survive in the world.” But after nearly a decade of not creating any after finding a job and helping take care of her mom took precedence, Barrientos found her way back to it in her late 20s. At that point, taking care of her mental health had become a priority.

“I was getting out of this depression I’ve been in for such a long time, and I started drawing again,” Barrientos, 34, said during an interview with The Nevada Independent. “That was the time in my life where it was reignited.”

The City of Reno Arts and Culture Commission chose Barrientos earlier this summer for a year-long appointment created to recognize artists in the community. As the city artist, Barrientos will have a solo exhibition in the City Hall Metro Gallery from mid-September through October, along with public talks about her work and process throughout the year. The program’s mission is to promote local artists and engage the community through art.

“I am proud for this accomplishment because I have put in a lot of work … I’m grateful and I’m happy for myself,” Barrientos said. “As an artist, for me, it’s a responsibility to use that platform to talk about important things and to elevate through art. Because art touches your heart no matter what color you are, or gender.”

Barrientos, whose parents immigrated to the U.S. from El Salvador in the 1980s, draws on her Salvadoran and Mayan ancestry in her artwork, using it as a tether between past, present and future generations. A consistent thread to her past is the way Barrientos signs her pieces, with the initials of her father, who passed away when she was young.

“I sign my work with [his initials], I always will, and he’ll always be alive in my heart,” she said. “And not only him, but all of my ancestors before him … By that being a reflection in my art, it’s keeping my ancestry alive because I’m just a continuation of that.”

Barrientos coined the term “Nuwave Mayan” for her artwork, again tying the past and present together. She’s worked across a broad range of mediums, including painting, spray paint, drawing, performance art and more. Her paintings are bright, vivid and bold and evoke ancient Mayan symbols and art.

Through her appointment and upcoming exhibition in Reno City Hall, Barrientos wants to invite her community into spaces where it’s been historically left out.

Barrientos also hopes to spread awareness about Animarte, an all-ages arts and music nonprofit for kids and teens from underserved backgrounds which provides weekly no-cost art workshop classes at the Holland Project.

This portion of the article is shared as part of our collaboration with The Nevada Independent. This story was originally published on August 30, 2021, and written by Jazmin Orozco Rodriguez.