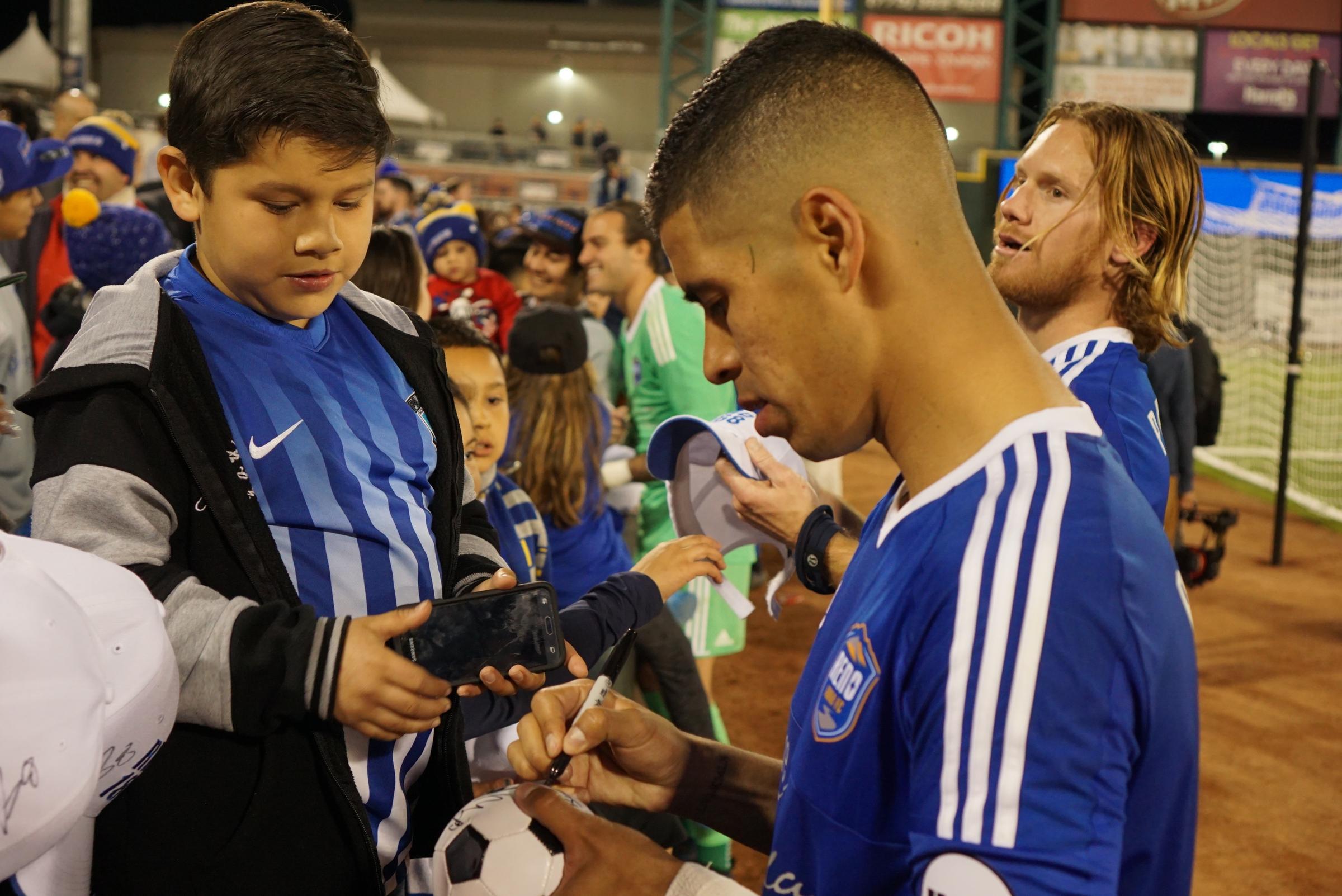 Junior Burgos signs autographs at the end of the game. Fans are willing to get anything signed from Burgos, including T-shirts and mini soccer balls. CREDIT: Aaron Serrano

A sea of blue and yellow stops traffic down Virginia Street as fans bang drums, wave flags and chant at the top of their lungs. Once in the stadium, they find their designated seats but they don’t sit down; the atmosphere is contagious.

It’s that feeling of being a family that really makes it amazing,” said Laura Moreno, a self-described soccer fanatic and a diehard member of the Battle Born Brigade, Reno’s first soccer fan club. 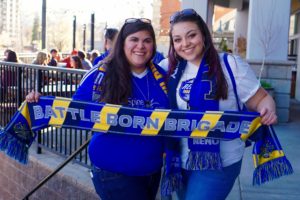 Angela Rafferty and Laura Moreno have been part of the Battle Born Brigade from the very beginning. Thanks to the brigade, their friendship has blossomed.
Credit Stephanie Serrano

Every game day, the Brigade meets at the iconic “Believe” sign at Reno City Plaza one hour before kick off. From there, about 50 or more people march through town into the Greater Nevada Field, home to both the Reno Aces and the city’s first professional Soccer team, Reno 1868 FC.

“In soccer, 90 minutes in a supporter section doesn’t seem long enough. It’s 90 minutes of pure beautiful sound, of chanting, of excitement, and it is hard to describe without actually, like, ‘Here come with me,’ because the minute somebody new comes into our group we’re like, ‘Oh, here is a chant sheet; here is one of our scarfs.’”

If you haven’t been to a soccer game before, you’ll notice the fans wear scarves – this is a tradition you’ll often see in European games as well. Long before game days happen, the players are working hard at practice.

Ian Russell is in his first head coaching position with Reno 1868 FC. Prior to this, he was an assistant coach for the San Jose Earthquakes, Reno’s MLS affiliate.

“I was excited; I knew when the San Jose Earthquakes were starting this team up that I would be interested in this job,” Russell said. “I think there has been a lot of youth soccer here and just the fact that they have a professional team now is really good for the community and the city.” 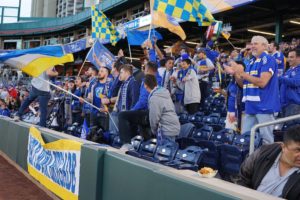 Members of the Battle Born Brigade have special seating behind the goal at the Nevada Greater Field.
Credit: Aaron Serrano, Freelance Videographer

There are four soccer clubs in Northern Nevada for kids as young as five. Reno’s professional players understand that they are role models for this younger generation.

“For me, it is a humbling experience,” said player Junior Burgos, “because I know that at one point I was a kid and I was looking up to my dad and his teammates and thinking, ‘Wow, they’re my idols. These guys are amazing. I want to be like them.”

Burgos is 28-years-old and one of the most experienced players on the team. He was the first player in Cal Poly’s soccer history to be drafted to the major leagues, but his legacy really starts more than 1,600 miles away.

“I was born in El Salvador and I came over when I was 12. It was tough. When you’re a kid you always think about the United States, like Disneyland and a happy country. When I came here, I didn’t know any English, so when I first enrolled into school I think that was my biggest challenge because I didn’t know how to talk to the other kids. But I always played soccer, so that always allowed me to be myself.”

Burgos also plays for his national team El Salvador and his ability to speak two languages helps him connect with his fans. 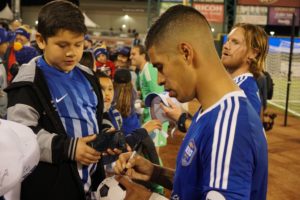 Junior Burgos signs autographs at the end of the game. Fans are willing to get anything signed from Burgos, including T-shirts and mini soccer balls.
CREDIT AARON SERRANO FREELANCE VIDEOGRAPHER

“I think that they identify themselves with me because if I hear them speak Spanish, I speak Spanish back,” said Burgos. “It’s a good way to connect with the community to be able to let them know that us Spanish players are able to represent them and that you can succeed in a different country whether you speak English or not. They really look up to that and respect that a lot.”

Before each game, Burgos said he hangs a rosary made of flower petals in his locker, given to him by his grandmother. He says a prayer, eats a chocolate caramel bar and heads to the field.

“I reach out to God and let him know that I am here to do my job, to take direction the best way possible, and that nobody gets hurt, that everybody comes out here and has a good time, and that the best team wins.”

Reno 1868 FC is only at the start of their season. They have a full schedule on the way as they play through the middle of October.