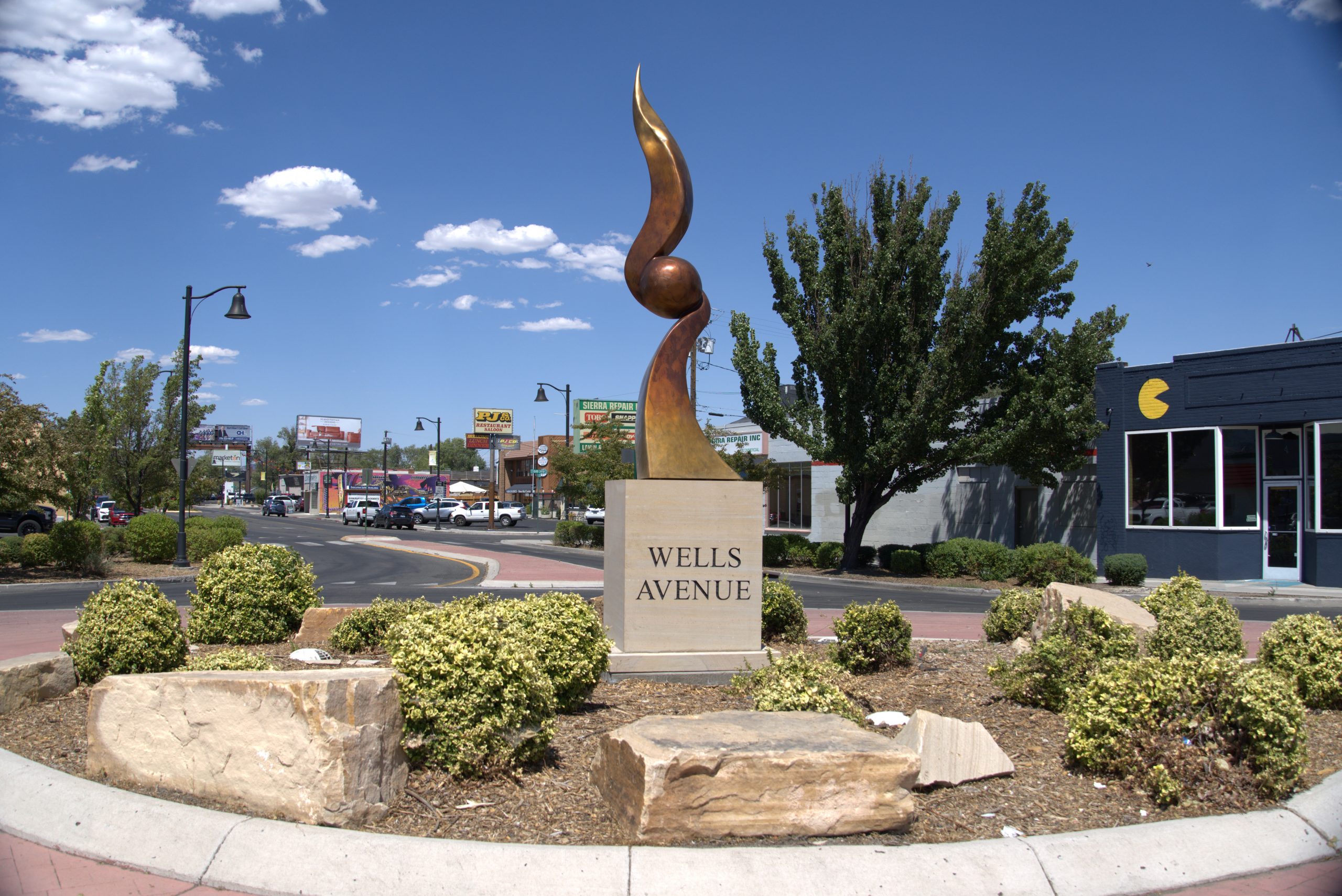 Wells Avenue District borders Holcomb Avenue on the west, Locust Street to the east, Ryland Avenue to the north and Virginia Street to the south. Photo: Abby Ocampo/This Is Reno.

Wells Avenue is one of the most popular and picturesque neighborhoods in the city of Reno. It is known as a great place to see art murals, visit small Latino restaurants, salons, tattoo parlors, clothing and pet stores. Over the past few years, Wells Avenue has seen numerous new businesses flourish and has also begun to see its share of  housing problems similar to those affecting neighborhoods in other parts of the country.

What’s happening on Wells? Is Wells Avenue changing its face? Is the district becoming gentrified? This Is Reno presents this five-part series focused on the Wells Avenue area and what neighbors, business owners and experts have to say about how the area is evolving.

“Wells Avenue is continuously changing,” said Brian Bonnenfant, project manager for the Center for Regional Studies at the University of Nevada, Reno, who remembers his first early years living there.

“When I was a kid, that was our midtown,” Bonnenfant said. “There were a lot of businesses that stretched along Wells to Park Lane, which is being renovated into the Reno Experience District and R.E.D. apartments. And then across the street [from the now R.E.D., then Park Lane Mall] was Shoppers Square back in the day. Now they’re calling that a public market, but that was midtown back in the 1970s.”

What Bonnenfant says is what many Reno residents are noticing. Wells Avenue seems to be the new focus of attention for entrepreneurs and investors, who are modernizing the face of Wells. He thinks part of this phenomenon is caused mainly by the location and the potential of the residences.

“It is such a prime location,” said Bonnenfant. “Local builders in the community have long targeted that area because it’s an older housing stock that may not have been taken care of over … time, maybe a rental for a long time, that they can go in there and pick off for a low price and then rehab it, renovate it and either rent it for a lot more, or sell it for a lot more. So they’ve always been a bullseye because of the location. It’s just such a great location.”

For realtor Ed Killian, the modernization of neighborhoods like Wells is something that is happening in communities all over the country; however, he believes that Reno is partly influenced by what has happened next door in California, so, for him, it was just a matter of time.

“I’ve seen all of what’s happened from the Bay Area because that’s where I was from, too. And it was coming this way. So I kept wondering when it was really going to get here, because it was a wave of development, wealth and progress in terms of real estate coming this way. And I just kept waiting for it,” said Killian, who has been working for about 50 years in the real estate business.

“Sacramento’s downtown changed dramatically, then Truckee did a total revitalization in its downtown, and I think Wells Avenue most likely has been influenced tremendously by [that], and it’s just a natural progression of what is now Midtown in Reno,” he added.

Two of the most notable developments taking place next to Wells Avenue are the Reno Experience District and the Reno Public Market, the former Park Lane Mall and Shoppers Square locations just to the south of Wells. Both projects plan to bring freshness and renewal to the area, bringing in new customers and residents.

The master-planned community, when finished, will include 1,300 luxury apartment homes ranging from studios to ultra-luxe penthouses; 70,000+ square feet of retail space; 170-room hotel; two-acre park; and 382,000 square feet of custom office space in the tech campus.

However, some Renoites might still feel some nostalgia for what used to be Park Lane, what was for years one of the most popular malls in the city.

Park Lane opened in November 1964 and closed in January 2007 due to competition with other malls in the area. After that, it was demolished and the property was a vacant lot until it was bought by Reno Land.

We asked Barrie Lynn, realtor and preservation activist, why Lyon Living decided to choose Reno and specifically the Wells Avenue area to build luxury apartments. She said it’s all about market opportunities.

“It’s not much different than what has happened with Rancharrah and other places. It’s like a destination. It’s like a theme. They’re branding their product and, obviously, if they didn’t think that there was a market for it, they wouldn’t be doing it,” she said.

Lynn added that there are two major factors that make the area attractive: density and low taxes.

“There was a big piece of land that was available that is in an area that’s zoned for that kind of density,” she said. “So they couldn’t have done this in a different area because other zonings wouldn’t have allowed many units.

“The other thing is, I think there were some entitlements there that they got from the original purchaser of the property. They got some incentives on abatement of sewer connection fees, and they were also able to get [an] Opportunity Zone designation. So there are some tax incentives for them on that,” she added.

In 1923, Anthony Casazza purchased 140 acres of ranchland between what is now Plumb Lane and Vassar Street. Forty years later, the Casazza family transitioned from ranching to retail, opening a $2.4 million shopping complex on the property known as Shoppers Square. Business started at a humble pace – the first tenant was a drugstore, then came a grocery store, followed by 15 shops.

The former Shoppers Square, now being remodeled as Reno Public Market, is promised to be “a place where you can connect with friends and family, get a casual bite to eat, buy fresh produce, sample craft beer or purchase the latest fashions.”

It features retail shops, a CVS, a food hall, Sprouts Farmers Market, Fifty Fifty Brewing Company, Port of Subs and Cold Stone Creamery, among others stores. Reno Public Market will also be a space for art demonstrations and performances.

Gentrification is known as the process in which an area of a city experiences an influx of middle-class or wealthy people who renovate and rebuild homes and businesses in a neighborhood, a process that, over time, often results in an increase in property values.

It often shifts a neighborhood’s racial/ethnic composition and average household income by developing new, more expensive housing and businesses in a sometimes more uniform and characterless architectural style, while also extending and improving resources that have not been previously accessible.

While Bonnenfant and Killian think Wells is experiencing a natural progression, caused mainly by the changing needs of the growing Reno community, Tom Stewart of the Wells Avenue Merchants and Property Owners Association is pretty clear to say that this might fall under the term of gentrification. Although he said he hasn’t necessarily seen negative effects yet, he says gentrification can be anticipated.

“I definitely get pushback on that term, but I think it is what is happening,” said Stewart. “I don’t like when real estate investors determine the look and the feel of the place. I think that should be determined by the residents and city council. They should determine the future of this area.”

Of the 200 businesses in the Wells Avenue area, only 40 are members of the merchants association.

Stewart said not all business owners agree that Wells Ave. is experiencing gentrification. He said some are happy because the new developments will bring new customers to the area, but others think it will eventually become a problem.

“We don’t all agree. Some people are happy with these new changes because it can bring in more money, a different clientele. But I do worry, because there are developers that are buying up all of these buildings, and they want it to be glitzy, like Midtown, and I am concerned that they can run out the old businesses who can’t afford to pay rent,” he said.

Today, Wells Avenue has 45 Spanish-speaking businesses, and although the neighborhood has been populated by different ethnic groups in the past, such as Italians and Irish, Stewart said the neighborhood spirit has always been preserved.

“You come down here; you get your car washed; you get your hair done; you buy something at the pet shop, go next door and get some metaphysical stuff. And that’s more of a hometown feel,” he said.

“One time somebody told me that I was complaining about a Salvadorian restaurant that went out of business. They had a long-following clientele. And they told me ‘Well, somebody bought the building, kicked him out.’ And I was expressing that this is where we lose these little local businesses,” Stewart added. “And they said ‘Well, I never see them on Facebook or on social media.’ And I think that maybe they don’t need that. That they have their customers because they’ve been here for so long.”

Stewart said there must be a way to have a balance between businesses and investors, and the community that has lived near Wells for many years.

“There’s a place for government, and there’s a place for business,” he said. “The city should be responsible for helping small businesses keep the rent low. There are ways to do it. Same with the residents that live in this neighborhood.”

For her part, Barrie Lynn thinks the Wells Avenue neighborhood–both the residential section and the commercial section–has been able to tolerate a certain degree of gentrification for many years.

“We have always had people from different economic backgrounds coexisting in this neighborhood. You can get $5 meals or $20 meals. There is some gentrification happening, but I don’t feel like it’s going to take over and be the predominant thing. Everybody will be able to thrive, and it will be like that for 20 more years because Wells is a very diverse and unique district,” she said.

Bonnenfant said that although market interests are usually the determining factor, one way to preserve the culture and traditions of Wells’ small businesses is for owners to start talking about their concerns, and for the city to let them know about the programs and resources they can access.

What is your opinion? Do you think Wells is changing its face?

This article is shared as part of our collaboration with This Is Reno. This story was originally published on October 17, 2021, and produced by Maria Palma and Abby Ocampo.