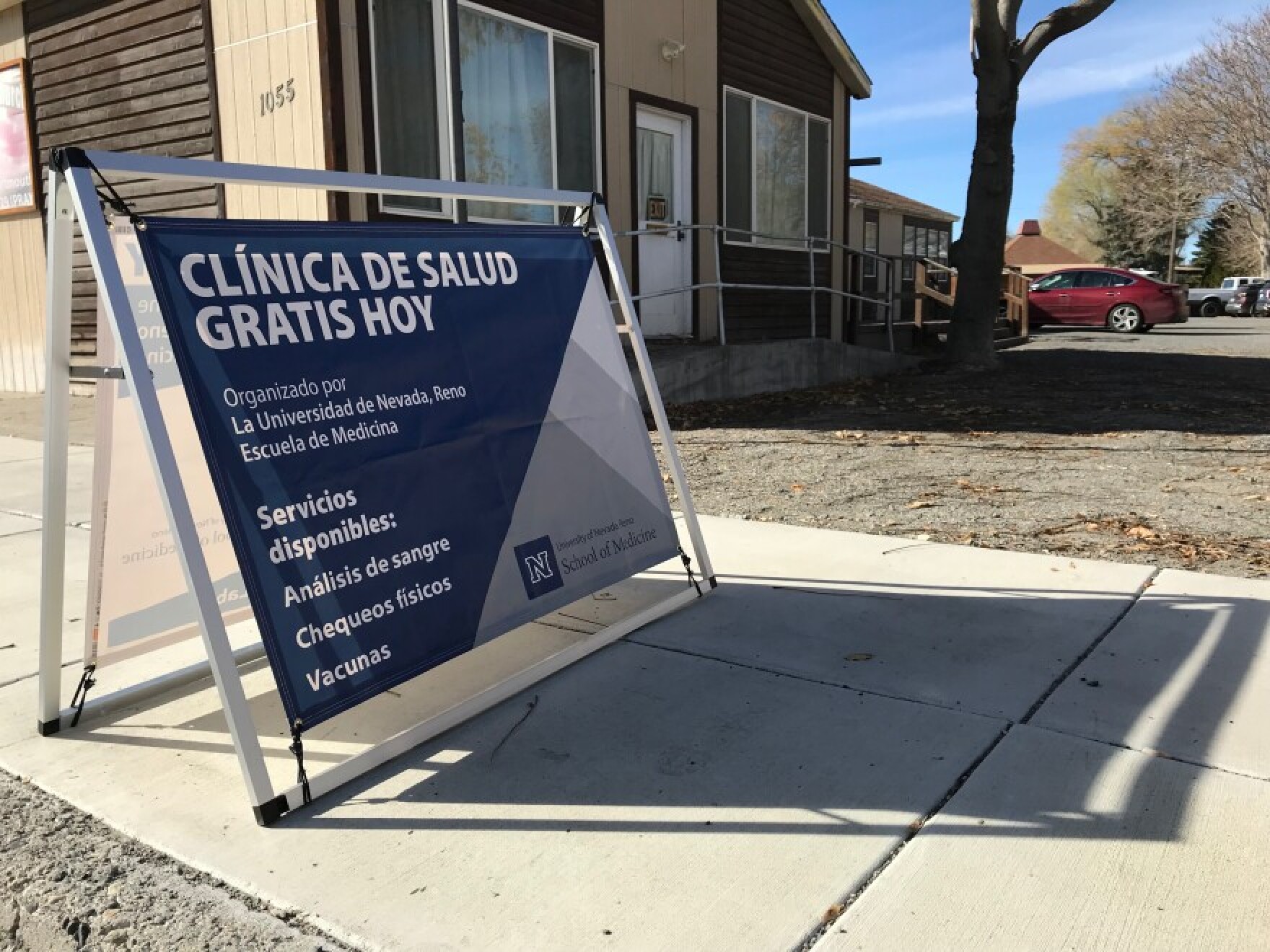 Latinos face high rates of COVID-19 and diabetes. But one community clinic in Reno is seeing sharp decreases in patient numbers, deepening the risk for people with chronic illnesses.

On a recent weeknight in Reno, Sonia Figueroa was leading a class on nutrition for people with diabetes offered through the volunteer-run Student Outreach Clinic. She’s in her second year at the University of Nevada, Reno’s medical school.

“It can be things like carrots, tomatoes, cauliflower, broccoli…,” Figueroa explained in Spanish.

Figueroa was listing vegetables that are low in starch, because they’re good for maintaining blood sugar levels. Her class that night was only in Spanish, although there’s an English version, too.

The Student Outreach Clinic is a full-service health center, where anyone without insurance can get free medical care. In addition to outreach and health education, medical students perform patient exams with supervision from volunteer physicians. In Reno, where about a quarter of the population is Latino, it serves a lot of Spanish-speaking patients.

Quezada has been coming to the clinic for three years.

“They provide me with medication for my diabetes,” Quezada said in Spanish. “And they check up on my diabetes. They’re always checking how I am.”

But on the day of the nutrition class, he was the only person who showed up.

Since the pandemic began, the clinic’s seen a sharp decrease in patient numbers.

Clinic volunteers are concerned about patients with chronic illnesses, because they’re not getting the long-term care they need to manage their health. Latinos, who are more likely to have diabetes than non-Hispanic whites and also more likely to get COVID-19, face even greater risk.

Olivia Penfil is the clinic’s executive director. She says before the coronavirus arrived, it would get so busy they had to turn people away, because they typically only had space for 30 patients at a time.

“A good Saturday clinic for us right now is about 16 patients,” she said. “So almost half of what we were seeing previously.”

For a while in 2020, the clinic closed its doors. Gradually it began offering virtual consultations and limited in-person appointments. Now that vaccines are widely available, it’s open for walk-ins again. But patients have been slow to return.

“Everybody got out of that routine of ‘How do I come to the [Student Outreach Clinic]?’ ” said Dr. Aaron Dieringer. “We’re still feeling the effects of that now.”

Dieringer is a family medicine physician at UNR and an instructor at the medical school. He helps oversee the care his students provide.

The clinic primarily serves low-income people, immigrants and others who are uninsured or underinsured. Dieringer is concerned the low turnout means more of them are slipping through the cracks.

“We know those patients are still out there,” he said. “It’s not that everybody got miraculously better.”

About a fifth of Latinos don’t have health insurance at all, according to research by the Kaiser Family Foundation.

Jane Delgado with the National Alliance for Hispanic Health says that makes it harder for them to manage chronic conditions.

“Diabetes is a major problem for Hispanics, but it’s a disease that can be managed, controlled, and if you intervene early, you can prevent onset,” she said.

Left untreated, diabetes can damage vision, circulation and the kidneys – and it puts people at greater risk of dying if they get COVID-19. According to one study by the Centers for Disease Control and Prevention, almost 40% of people who died of the coronavirus also had diabetes.

Latinos have been disproportionately impacted by the pandemic, too. The CDC found they were significantly more likely to come down with COVID-19 than whites – and twice as likely to die if they did.

According to Delgado, that’s because of the kinds of jobs Latinos tend to have: They often work in agriculture, the service industry, or construction.

“Being the essential workers – the people who had to go to work, who were least likely to be able to work from home – meant that COVID-19 had a major impact in everyone’s lives,” she said.

But the cost of getting medical care plays a role, too. Samantha Palacios, the clinic’s community outreach officer, says even though services at the clinic are free, many patients still expect to get a bill. That can lead them to put off visiting the doctor for as long as they can bear.

“It’s the first time they saw someone in 20 years, and now they’re coming in because it’s something that they can no longer ignore,” she said.

Palacios acknowledges the clinic could do better at advertising its services, especially in Spanish. But the students who run it have limited time and resources, so it can be a challenge to reach more people across the Reno-Sparks community.

Public health experts also say many undocumented immigrants and people from mixed-status families are hesitant to get the COVID-19 vaccine – or any medical attention at all – because they’re concerned it could lead to deportation.

“There have been instances where, even though that’s the way it’s supposed to be, that people are still asked for documentation,” she said.

The Student Outreach Clinic serves communities outside Washoe County’s urban population center with its Rural Outreach Clinic, which serves patients in a different town one Saturday a month.

They have to be flexible: In tiny Lovelock, 90 miles northeast of Reno, the clinic operates out of a church. On a Saturday morning in mid-November, Taree Chadwick oversaw a busy scene as med students carted in big plastic boxes full of medical gear and set up exam stations.

“Put out the blood pressure cuffs and gloves and the wipes and all of this stuff to create, like, a vitals station at one of these tables,” she told them.

Chadwick says they have to be even more proactive when it comes to serving patients in rural areas.

“We see a lot of patients who are uncontrolled with their diabetes, who are never going to see a doctor because they don’t have access or they don’t have time,” she said. “When we come out, we’re really trying to reach those diabetic patients.”

But that day in Lovelock, the clinic didn’t see any patients at all.