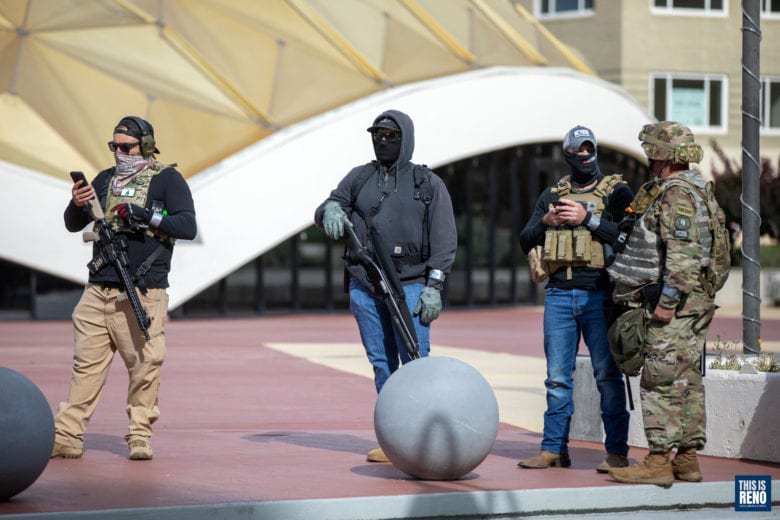 Three Percenters “stand guard” at the Pioneer Center in downtown Reno during a peaceful Black Lives Matter vigil June 7, 2020. Photo This Is Reno

A report last week warns of armed militia groups in Nevada and speculates about their potential to disrupt voting in the upcoming election.

The report is the product of a collaboration between national nonprofit Political Research Associates and local progressive groups Progressive Leadership Alliance of Nevada (PLAN) and Indivisible Northern Nevada.

“This report was motivated by the increased presence of armed militia groups at political events around Nevada and by a growing number of violent incidents and plots in Nevada and nationwide,” it states in its opening.

The report also says “that such groups could carry out violent attacks both before and after the 2020 elections” and questions the possibility that “armed groups will show up as ‘poll watchers’ and attempt to intimidate voters.”

It gives an overview of different armed militia groups—including the Proud Boys, the Boogaloo Bois and the Three Percenters. The document also highlights numerous instances of far-right violence, including the armed re-open Nevada protest at the Governor’s Mansion in May and the August attacks on Black Lives Matter demonstrators in Douglas County. The report lists incidents as far back as 1988, when Tony Montgomery, a Black man, was murdered in Sparks by two Neo-Nazis.

The authors urge public officials to use existing state laws, which it outlines, “to clamp down on illegal militia activity.”

Political Research Associates has also helped organizations in other western states to similarly document the rise of right-wing militia activity, including a 2016 Oregon report penned shortly after the occupation of the Malheur National Wildlife Refuge.

Read the entire article at This Is Reno shared as part of our collaboration to distribute more bilingual news. This story was originally published on October 21 and was written by Jeri Davis and Bob Conrad.