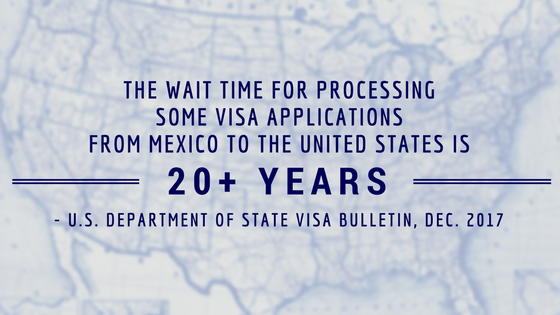 The heated national debate on immigration often brings up the question of why undocumented immigrants didn’t enter the U.S. legally.

Our reporter Natalie Van Hoozer has been researching this topic, and she’s finding that it’s not that simple. She sat down with KUNR Reno Public Radio News Director Michelle Billman to break down the visa process.

Here are six things to know.

3)    According to the Pew Research Center, it is estimated that, as of 2015, there are approximately 11 million undocumented immigrants in the United States. According to a 2014 study by the Pew Research Center, there are 210,000 unauthorized immigrants in Nevada. That means 7.2 percent of Nevada’s population is undocumented, which is the highest percentage for any state.

4)    The time it takes to be granted a visa depends on each person’s individual situation. Looking at the U.S. Department of State visa bulletin for December and using Mexico as an example, those in the first preference category are unmarried sons and daughters of U.S. citizens. The applications being processed right now for people in this group were filed in April of 1996.

5)    If your application is processed, there are other barriers that can stop the application from going through. According to local immigration lawyer Richard Fleischer: “If that U.S. citizen parent dies in the United States, the petition dies, so maybe a year before they get to come, the citizen parent dies, it’s over, they can’t come in legally.” Fleischer has been practicing immigration law for 37 years.

Right now there is talk of immigration reform, but what does that look like?

Attorney Richard Fleischer says he wants to see an increase in the total number of visas allocated. He thinks the annual limit of 226,000 family-preference visas is too low, which encourages some people to come to the U.S. illegally because they don’t have the time or money to come otherwise.

Legislatively, DACA recipients and different nonprofit organizations are also advocating for what they call a “clean” DREAM Act. The DREAM Act is designed to protect undocumented young immigrants vulnerable to deportation, so making a “clean” version of this legislation would mean that the DREAM Act would be passed without stipulations for things such as border security requirements.

There is also the topic of sanctuary cities, which are cities that will not assist federal immigration agents to pursue detaining undocumented immigrants. Right now, Republican State Senator Michael Roberson is collecting signatures to put a measure on the ballot which would ban sanctuary cities in Nevada.

On the other end of the spectrum, advocacy groups like the ACLU are fighting to reform the immigration process, supporting sanctuary cities and helping these undocumented immigrants be able to stay.