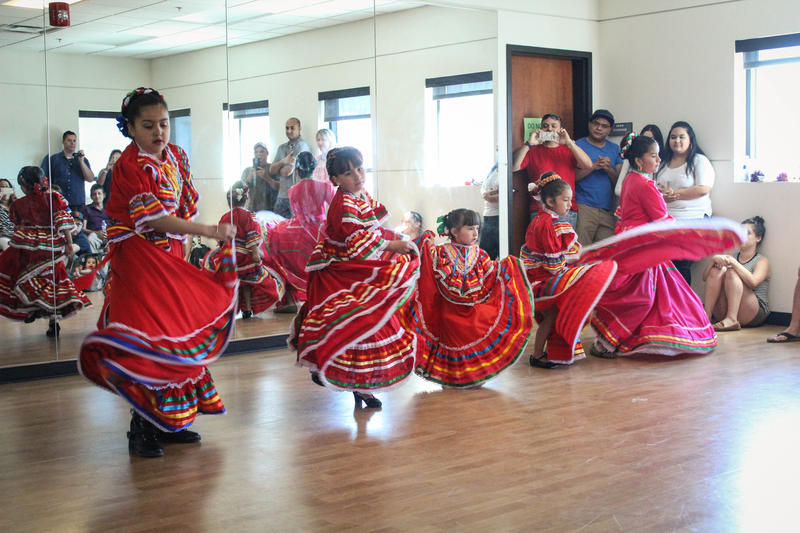 Local Folklórico instructor Sarah Perez doesn’t have an age limit, she teaches children as young as three to adults.


Sarah Perez is a dance instructor who teaches a handful of small children the traditional Hispanic dance Folklórico.

“In Artown, I have a group of kids that are going to be doing some Folklórico dances mainly from the region of Guadalajara and one Veracruz dance,” Perez said. “They are described as more of a folk dance, a small town, colorful story through dance.”

Perez was born in Guadalajara, Mexico and moved to the United States when she was only four years old. At first she lived in Los Angeles, where she learned Folklórico in her kindergarten class. Within a few years she moved to Reno, where she didn’t have access to that kind of cultural programming.

When I first moved to Reno in fourth grade there wasn’t even an ESL program in the school that I was in,” Perez says. “I was a translator for my mom during conferences and I see that that has changed, being an educator now, that our parents are starting to be more involved because of the diversity of the schools.”

Now Perez is an elementary school teacher and both with teaching and dance, she sees the importance of bilingual outreach.

This was the first time her team was asked to participate in Artown, which has been deeply embedded in Reno’s culture since 1996. Autumn Reeder is the education coordinator for Artown, one of her duties is the expansion of a children’s program, Discover the Arts.

“Discover the Arts is really important to me because it is so inclusive. Anyone in the community can come out and have an artistic experience. We’ve eliminated arts in schools, and we really need to make time for kids to be problem solvers, to be creative thinkers, and this is the kind of place that we can do it. It’ll be in English in Reno, and it’ll be in Spanish in Sparks,” Reeder said.

After 21 years, this is the first time Artown is introducing bilingual Spanish-English programing, including the first-ever Artown promotional booklet entirely in Spanish. Their events are still growing and generating attention but Sarah Perez said effectively reaching a Spanish speaking audience is challenge.

I think with the Latino community it is more about word of mouth. Today I think a lot of the kids’ grandparents and aunts and uncles will probably be coming in, and they tell their friends that events like this are happening,” Perez says.

Kristias Trujillo has been in Reno’s Latin music scene since he was just a young boy. Now he is part of two local bands, Drinking With Clowns and Zona Norteña. Zona Norteña has been together for a little over a year and has found success in the Latino community.

“Zona Norteña is straight up covers, it is all quinceañera, birthday parties, weddings and it has been different because it is mainly all Mexicans and you’re there to pretty much play what they want to hear,” Trujillo said. “I am used to playing original music, since I was playing rock in Español, which is Spanish rock. I played that for 12 years, so it is different for me to try this norteña band.”

Trujillo describes the sound of Zona Norteña music as original Mexican country music, but because they play covers, he feels that they are a live jukebox band.

The other band he plays in, Drinking with Clowns, has been around a lot longer and last year they had the opportunity to headline Artown. Even though Drinking With Clowns is a Latin band, growing their Hispanic audience has taken much longer.

“I’ve noticed that with Drinking With Clowns there has been a change of a lot of Hispanics going to our shows because we started playing covers. Once you start playing covers for the Hispanics, they start getting interested in your band,” Trujillo said. “Lucky for us, is that we try to put both languages together, whether it is a cumbia or it is a rock song or reggae song, and sing this in Spanish, for us that has been the formula and it has been working because we’ve noticed a lot more Hispanics come up to our shows.”

For Trujillo, diversifying his audience has been hard and forced him out of his comfort zone. Despite the challenges that lay ahead for artists and organizations like Artown, he said making the commitment to provide bilingual events and opportunities is the first step.