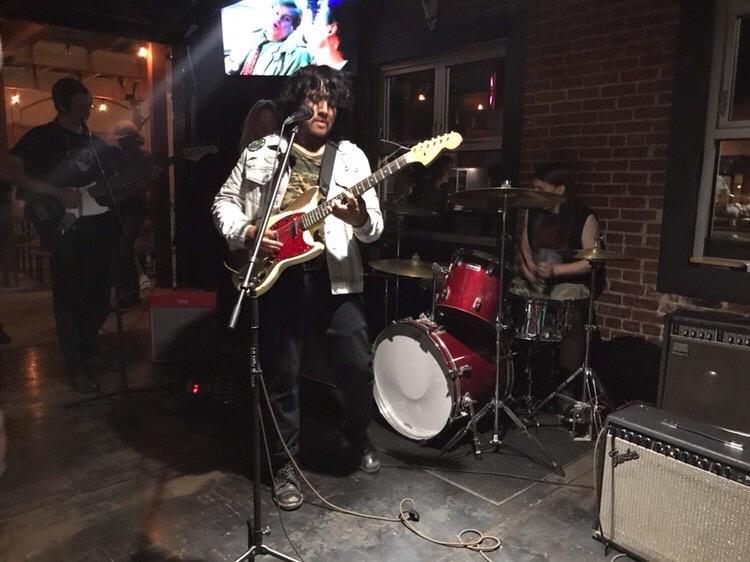 PHOTO COURTESY OF JESS KITCHINGMAN Christopher Monzon, a former UNR student, performs at the 40 Mile Saloon in Reno on September 4. Monzon left the university a few years ago and hopes to return to pursue a music degree.

Nearly one in five students at the University of Nevada, Reno identifies as Latinx. Latinx is a gender-neutral term for Latino. Often, these students are first generation or “first gen” college students and face a unique set of challenges when it comes to retainment and support. KUNR’s Andrew Mendez explores.

Chistopher Monzon is in his friend’s living room strumming his guitar. One day, he hopes to return to the University of Nevada, Reno to major in music and pursue his passion further. Several years ago, he was enrolled at UNR, but by his second year, he dropped out.

Monzon says he felt pressured to attend college when he really wasn’t ready.

Monzon remembers back in college how he placed a lot of pressure and high standards on himself. That led him to struggle with anxiety, making it uncomfortable to even be in class.

It was acknowledging the fact that I needed support,” Monzon said.“When, in the narrative that I’d been taught, I wasn’t supposed to. I was supposed to have it figured out, and if I didn’t know, I would have to learn, so support was almost like a form of weakness.”

“I remember having conversations where I said, ‘Would you be interested in going to a counseling center?’ ” Valle said. “I got the answer from students,’I’m not crazy,’ and I said, ‘I never said you were.’ There’s an aspect of ‘I don’t need to go because, you know, I can work this problem on my own. I have to internalize it.’ It’s taboo to bring it up in this community, but I think it’s really encouraging that–not forcing–encouraging students.”

Another problem Valle frequently sees is a misunderstanding of how higher education works by parents who didn’t get to have those experiences. Parents may believe that when class is over, their child is able to return home and do other tasks.

Nationally, 2.2 out of every ten Latinx adults have received an associate’s degree or higher, as opposed to 3.9 out of ten adults within the general population. That’s according to a report by Excelencia in Education, an organization working to advance Latinx students in higher education. A multitude of factors play into degree attainment, retention being one of those.

At UNR, specifically, the university collects data on first-year, incoming freshman, but institutions across the country gather their data in different ways, so there isn’t a clear picture of how many Latinx students are being retained overall. For the 2017-2018 academic year, the most recent year with available data, just under 77% of first-year Latinx students were retained, compared to more than 81% of their white peers.

Saundra Mitrovich is the former coordinator of outreach and retention for The Center: Every Student. Every Story, a campus organization at UNR that supports students of all backgrounds as they work to attain their degrees. She says students have to be engaged in various aspects of campus life in order to succeed academically.

“So, when we’re thinking about persistence, we want to think about: how are we building relationships with those students?” Mitrovich said. “Are they engaged when they’re retained? Which means: are they participating actively in service learning opportunities? Are they actively participating in clubs and organizations? Most often, then, they’re retained and, then, they persist to graduation.”

As for Christopher Monzon, the musician we met earlier, he still wants to go back to college and get his degree, but for now, he’s paying off the student debt from his last go-around.