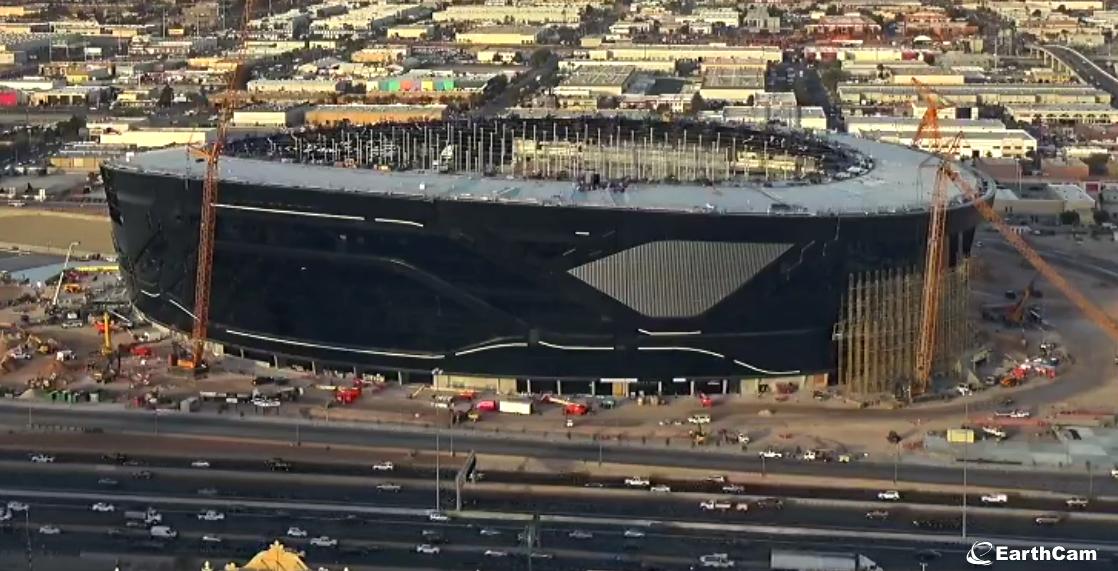 An aerial view of the construction of Allegiant Stadium, the new Las Vegas home of the Raiders. Credit: Screenshot courtesy of de Las Vegas Raiders

In January, the Oakland Raiders of the National Football League officially became the Las Vegas Raiders and their new home is now Allegiant Stadium where they’ll play their inaugural season this fall.

At the University of Nevada, Reno, there are an abundance of Raiders fans that hail from the San Francisco Bay Area, and even some from right here in Reno, as it was the closest NFL team to their hometown.

On campus, there is also a large group of students who make the yearly trek north from their hometown of Las Vegas. Actually, 21 percent of this year’s collegians hail from Clark county, according to figures provided by UNR. Needless to say, there is lots of excitement in Nevada about bringing a another professional sports organization home to the Silver State.

When the Raiders played in Oakland, it wasn’t unusual for students to make the three and a half hour trip for an overnight or day trip on a Sunday for gameday. It was possible to leave for Oakland early on a Sunday morning for a midday kickoff time and be back in Reno by late evening.

Travelling to Las Vegas from Reno, however, is a bit more strenuous. The seven hour south down desolate land certainly isn’t desirable, even for a weekend.

This leaves us with the option of flying to Las Vegas for a weekend trip, as the flight time is only an hour long. However, it’s important to consider what the average cost of a trip south would cost compared to one over the Sierra to Oakland.

A flight booked a month and a half out from Reno to Las Vegas would cost around $355. The median price of a Las Vegas Raiders ticket next season goes for $148. This means that this excursion alone could easily cost a little over $500 and it doesn’t include lodging, concession stand costs, and any other additional costs that could come up over the weekend.

Regardless of the cost, a professional football team home to Nevada is a big deal. Don’t be surprised when the season kicks off next fall and students from UNR head down to Allegiant Stadium to watch a game on the gridiron. –CC