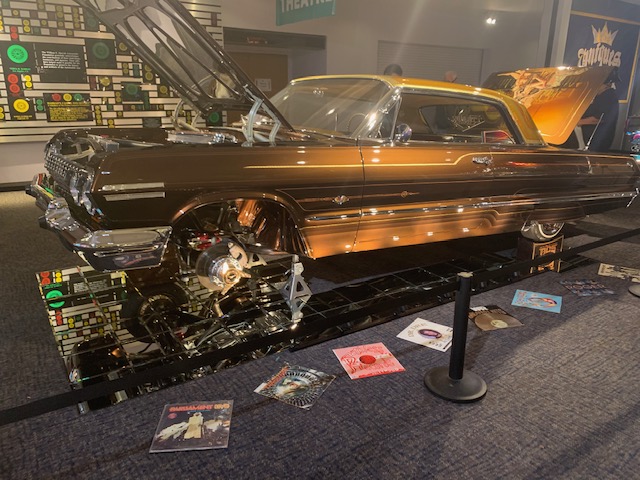 Carlos Lopez, 23, can’t remember when he wasn’t surrounded by classic American cars in various stages of being customized into lowriders. It’s a family tradition.

“My great-grandfather used to race Chevy Impalas way back,” he said. “As the generations passed, that progressed into building cars. My great uncle, Tony Castellanos, and my dad, Richard Lopez, got into lowriders and my dad started building those in the mid-80s. Growing up, it was a 24/7 thing.”

After work and on weekends, Richard Lopez built cars in the family garage and backyard. “We were surrounded by it,” Carlos said. “He would always take us with him, whether we were going cruising or to car shows. We were right in there with him.”

The craft and artistry of the Lopez family is a centerpiece of the National Automobile Museum in Reno’s current exhibition, entitled “Low and Slow.” It’s a celebration of lowrider cars, art and culture that runs through mid-April. In addition to the cars, the exhibit includes bicycles, trikes, motorcycles, and even pedal cars. The vehicles feature intricate details of custom paint, hydraulics, chrome, engraving and graphics.

And, of course, almost everything has been lowered.

Reno residents who attend the annual Hot August Nights event will be familiar with lowriders, classic autos with hydraulics that can lift a car to any angle, monster sound systems, plush interiors and chrome-plated wheels and engines. The vehicles always make a visual statement: their intricate air brush designs and pin striping are covered in layers of custom lacquers, often two dozen or more hand-rubbed coats.

The genre has grown from a Southern California phenomenon, to a wider national hobby and into a form of contemporary art that now is appreciated throughout the globe. Lowriders have been the focus of museum exhibitions from Los Angeles to the Louvre in Paris to Washington, D.C.’s Smithsonian Institution. Car buffs everywhere have caught the lowrider fever.

“Japan has become a Mecca for lowriders,” Carlos Lopez said. “There are car clubs in Europe and Australia; all over the world… It started as a Mexican-American tradition, but today it goes across all ethnicities. It seems to be growing more and more.”

Historically, the “paseo” tradition in Mexico involved young unmarried villagers walking around the central plaza with women in one direction, men in the other. The goal was to make eye contact, and, couples hoped, nature would take its course. According to an article in Lowrider magazine, “the cruise is merely an automotive extension of this ancient tradition practiced in Southern California long before it was ever part of the United States.”

In the Mexican-American barrios of East Los Angeles and San Diego, cruisers have been lowering cars to pavement-scraping heights since the late 1930s, according to the magazine. The teenage “zoot suit” fashion trend of the early 1930s, popular with all cultures, became part of the cruising tradition. Young Mexican-American “zooters” adopted a style of slicked-back hair, spit-shined shoes and cruising thoroughfares slowly in cars that rode lower than normal.

From sand bags to hydraulics

Initially, drivers would use sand bags or concrete blocks in trunks to lower the rear end of Chevys, a technique that evolved into chopping coil springs to achieve the same effect. Southern California law enforcement started citing cars for being “too low.” That led to a new technology among lowriders, the ability to raise and lower the cars at the flip of a switch using hydraulics originally intended for aircraft landing gear or truck lift gates.

Today some car shows sponsor competitions for “hopping,” with the cars often bouncing completely off the ground.

In Reno, Carlos’ dad, Richard Lopez was one of the first devotees of lowrider culture, beginning in the mid-1980s. He turned his passion into a business, his “Auto Color Studio,” a full-service body shop with a specialty in lowriders. “The whole family has taken an interest in lowriders,” Carlos said. “We work in the shop with my dad, and my brothers and I are pretty hands-on with all the builds. Everybody helps in their own ways, like getting involved in the car shows, setting up, tearing down, cleaning the cars. We pitch in for whatever events that are going on.”

Classics at the museum

The Chevy Impala has an X-shaped frame that makes it perfect for lowering and modification with hydraulics. The exhibit at the Auto Museum includes Richard Lopez’s work on a classic 1963 Chevrolet Impala in Ginger Bronze paint with graphics, gold-leaf and pin striping. The car belongs to his son, Jesse, and has won numerous awards on the show circuit where it is known as “Egypt 63.”

George Luna, another leader of the local lowrider community, can be spotted around town in his distinctive yellow 1936 Packard convertible, which also is part of the exhibit. Some museum patrons may be surprised to see a historic Packard modified as a lowrider, but today it’s not unusual to find everything from classic pickups to modern Mercedes modified and lowered, Lopez said.

Unlike many lowriders that see limited street use, Luna has driven coast-to-coast in his car and plans a road trip to Chicago when the exhibit closes in mid-April. He credits working on lowriders with helping him turn around his early life of crime and gang involvement in Southern California. Today, he works in the auto body industry and is the leader of the local/national “Viejitos” car club.

Tony Castellanos, Richard Lopez’s uncle, has used the lowrider lifestyle to help local young people find a positive direction in their lives. In 1996, he founded Revelations, a faith-based Christian car club in Reno.

“I use cars to teach leadership and the positive effects of hard work and good craftsmanship,” he said. “They are a tool to attract youths and give them a path to earning self-respect and a positive livestyle.”

Richard Lopez, Luna and Castellanos joined with the museum staff to curate the exhibit. They also enlisted dozens of local fans and artists for contributions. In addition to models, parts, music and artwork, the exhibition features a wall-mounted display of about 15 local clubs’ metal plaques that are designed to be displayed on the rear deck of members’ cars.

A matter of pride

“It’s more of an investment than just a present,” he said. “That’s the way we’ve been raised to see it. We take very good care of them. We understand what goes into these cars so we know how to take care of them and appreciate what we have.”

A lowrider car is an extension of its owner, Carlos said. “It tells the story of the owner. It shows pride; having that pride is huge. It’s hard to explain, having grown up with it. Other lowriders understand. There’s a bond there. It’s our second nature now. The way we dress, the way we carry ourselves, is all a part of that.”

The Museum is located at 10 S. Lake Street and is open Monday – Saturday from 9:30 a.m. until 5:30 p.m.  The Sunday hours are 10 a.m. until 4 p.m.  Admission is $12 for adults, $10 for seniors 62 and older, $6 for youth 6 to 18; and those 5 or younger are admitted free. Museum memberships start at $45 and allow year-round unlimited free admissions. In addition to the lowrider exhibit, there are more than 200 historic automobiles on display including cars owned by celebrities, featured in movies and rare one-of-a-kind automobiles.

This story was produced by Frank X. Mullen for Reno News & Review, and was published in its English version, “The art of moving low and slow,” on February 27, 2021.

This article was adapted into Spanish and published in Noticiero Móvil thanks to our partnership with Reno News & Review.