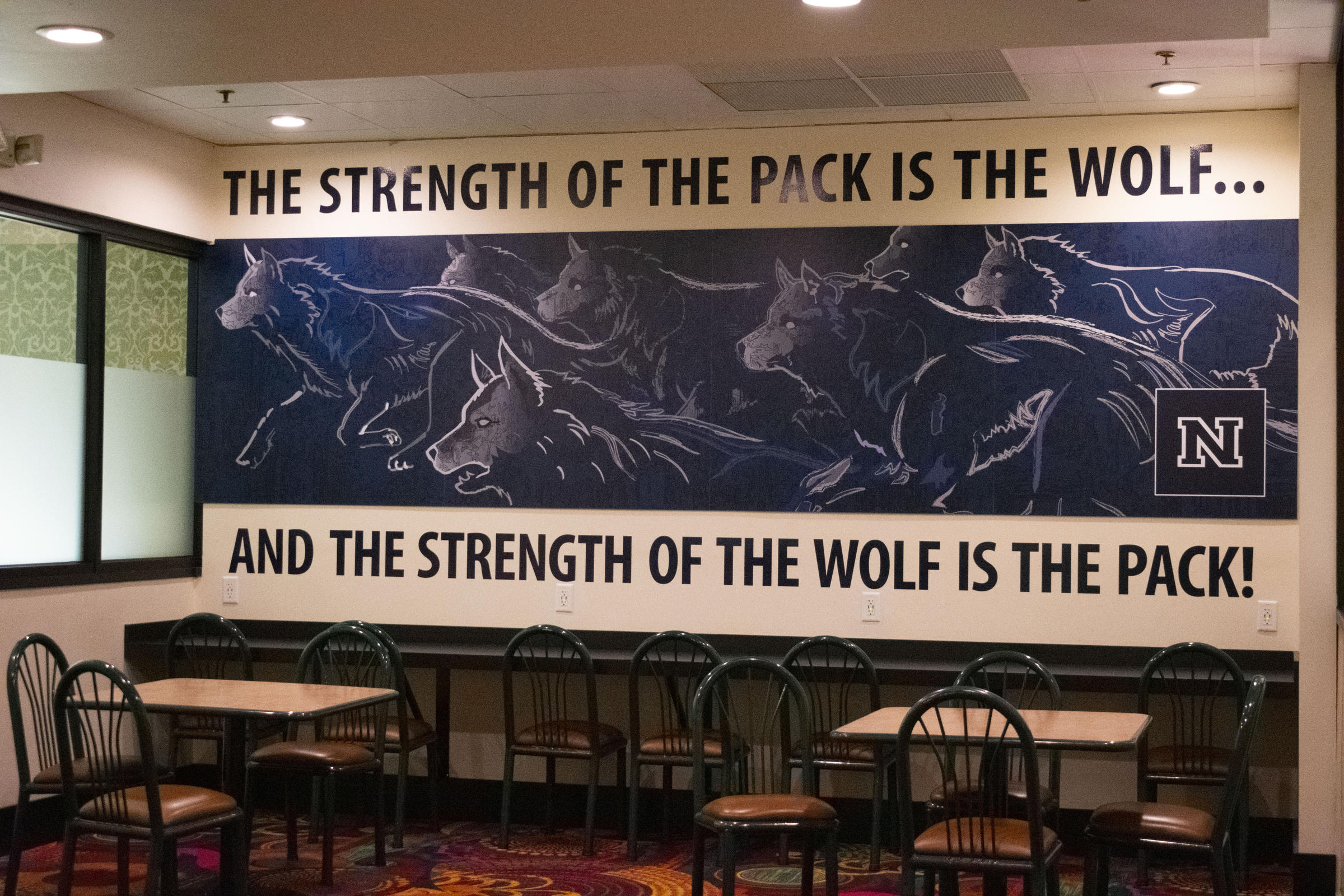 Lucia Starbuck A seating area on the second floor of Wolf Pack Tower.

This fall, the University of Nevada, Reno has been confronted with numerous acts of white supremacy, hate and bias on campus. Different incidents have occurred across multiple buildings, including Wolf Pack Tower, a residence hall located in downtown Reno. KUNR’s Lucia Starbuck and Andrew Mendez visited the tower to see how students and staff are doing.

In the elevator at Wolf Pack Tower, you need to use a key card to access any floors where students are living. This dorm is a bit unusual because it’s located in Circus Circus, which isn’t on campus. Over the summer, two dorm buildings suffered an explosion; there were no deaths or serious injuries, but many students were displaced. Since the semester began, three swastikas have been spotted at the tower. 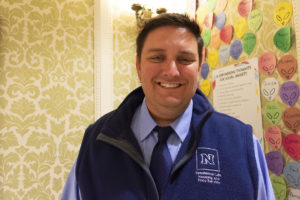 Toby Toland is the Assistant Director of Residential Life at UNR. He poses for a photo at Wolf Pack Tower.

“When you’re seeing an act of vandalism, any type of vandalism at all, is somebody degrading, defacing your home,” said Toby Toland, the assistant director of residential life at UNR. “When it’s an image that’s put in, that has a basis of hate and bias against it, that escalates very, very highly. So, I think it has a negative impact on the people that live there.”

Cove Carlson is one of roughly 1,300 students living at Wolf Pack Tower. He’s a freshman studying journalism. In light of what’s happened, he would like to see tighter security measures, especially in the lobby area on the first floor.

“I mean, I know they’re supposed to be checking our cards before you can come in. One time I was walking in and I was pulling my wallet out to get my ID to show the guy. I didn’t have it open yet, and he just went, ‘Okay, that’s cool,’ and waved me in.”

Carlson has chosen not to tell his parents about the swastikas because he doesn’t want to upset them. When his dad first moved to the United States from Thailand, he faced discrimination. 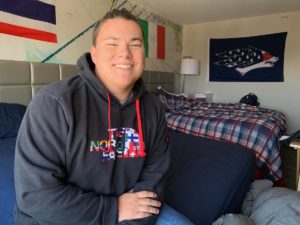 Cove Carlson, 18, is a freshman studying journalism. He poses in his room at Wolf Pack Tower.

“We’ve dealt with prejudice in the past. I’m from L.A. and so they’re far away and I know if I told them some of the stuff that might be going on, they might start freaking out,” Carlson said.

As far as security goes, university police say that staff from Eldorado Resorts, the tower’s owner, patrol the parking garage and nearby walkways. Additionally, a group called the Downtown Reno Ambassadors monitors the surrounding area. The ambassadors are not trained law enforcement, but they do communicate with Reno police. There’s also a university police substation, which is staffed in the afternoons and evenings.

Tommie Chapter-Clark is another freshman at the university, who is studying political science and is living at the tower. She was angered by the swastikas but said she wasn’t surprised it happened.

Chapter-Clark heard about the second swastika from her mom, who saw it on the news. The situation prompted a conversation with her mom and grandma on how to combat these expressions of hate.

“They were both like, ‘You can’t fight hate with hate, like, just be kind and loving to everyone,’ ” Chapter-Clark said.

Her mother, Anna Clark, lives in Las Vegas. She came up to Reno at the beginning of the semester to help her daughter move in before the symbols were discovered in a stairwell. For her, the whole 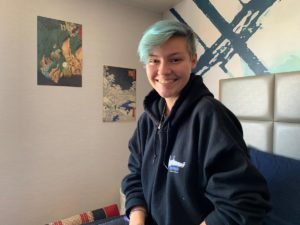 Tommie Chapter-Clark, 18, is a freshman studying political science at the University of Nevada, Reno.

thing has been disturbing.

“I wish that there had been a little bit of communication from the university about it as a parent,” she said.

Todd Renwick, the UNR Chief of Police, said that students are considered adults, so it’s not a priority to communicate with parents.

In addition to the three swastikas found in the tower, four swastikas were drawn at the Church Fine Arts building, and white supremacist fliers and stickers have been posted around campus. Renwick said the university is grappling with how often to provide notifications as new details emerge.

“I think there’s trying to find a balance of how many emails you send out every time these things happen versus not. I think those are still things that we’re working on and needing to improve on,” Renwick said.

Renwick often directs people to UNR’s Hate and Bias webpage, where community members can report incidents that have occurred on campus. But there are protections under the First Amendment for symbols like swastikas. Although there are investigations in place, no one has been caught, and if the police do charge someone, it will be for destruction of property only. 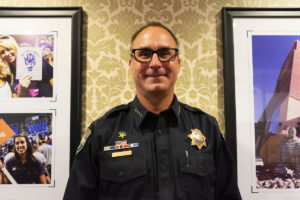 Todd Renwick is the UNR Chief of Police. He poses for a photo at Wolf Pack Tower.

“Somebody can hang a swastika in their office and it’s not illegal. It may not be of someone else’s beliefs or values, but those are the challenges that we face daily when it comes to the First Amendment,” Renwick said.

Someone Renwick communicates closely with is Atty Garfinkle-Berry. She’s the director of Hillel of Northern Nevada, an organization providing support for Jewish college students, many of whom she says feel targeted.

“The Jewish community, when it responds to swastikas, it will either respond with, for the most part, fear or anger because that symbol is a symbol of murder for us. It’s a symbol that the Nazis used and some people don’t necessarily understand it is a symbol of white supremacy. It’s not always poised at one person. It’s broader,” Garfinkle-Berry said.

At this point, the community has started a petition calling for UNR’s administration to take more direct action against white supremacy. It’s in response to the many expressions of hate on campus and a recent visit from controversial speaker Charlie Kirk, whose national group Turning Point USA has been accused of holding racist viewpoints. The petition also grabbed the attention of Democratic presidential candidate Kamala Harris, who signed it during a recent campaign stop.

In response, UNR President Marc Johnson released a lengthy statement unequivocally condemning the use of swastikas, calling them “poisonous and corrosive.” He also discussed the work the university has done, including holding forums with students and staff to gain insight in order to develop an action plan moving forward.

Lucia is a senior and Andrew is a second-year student at the Reynolds School of Journalism and contributed this story as part of our collaboration with KUNR.