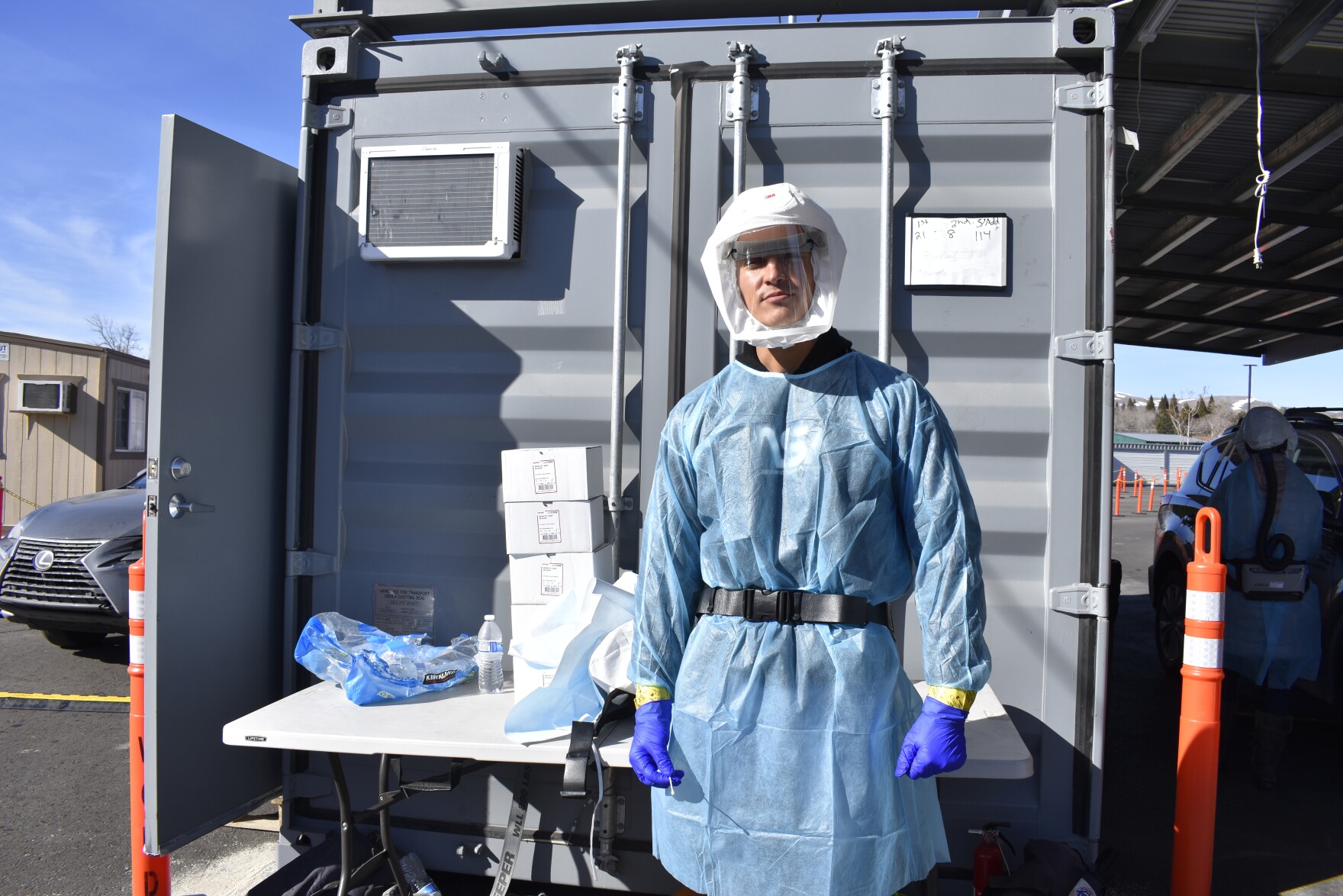 Adam Dutra is a COVID-19 tester with the Washoe County Health District at its testing site at the Reno-Sparks Livestock Events Center in Reno, Nev., on January 28, 2022.

The omicron surge has created a demand for COVID-19 testing. KUNR reporters Gustavo Sagrero and Lucia Starbuck are looking into how the region is responding, along with how and why to get tested. They sat down to chat with News Director Michelle Billman.

Michelle Billman: Gustavo, what are you seeing in regards to how people are even just trying to navigate getting the testing that they need?

Gustavo Sagrero: People are apprehensive and confused about where to go to get tested, and how effective it is. Over this past month, some folks have even been saying they’ve had to wait over a week to get their results, some haven’t even gotten them back at all. We recently learned that the state is investigating Northshore [Clinical] Labs, which manages some testing sites for Washoe County. The state’s not really releasing any details right now, and that ambiguity, along with the issues people are seeing in getting their results, is causing some concerns. Two of those sites temporarily closed due to staffing as well.

I think it’s worth acknowledging that a lot of these services are easier to access if you have stable housing, and either live as a citizen or a resident in this country. As you move away from those privileges, the harder it is to access this or any other form of care.

Billman: We’ve been hearing about the concern around false negative tests. Can you tell me a little bit more about that and how to know if that’s happened?

Sagrero: Really, a good indicator is if you’ve already taken a test and you start to feel unwell, maybe even having some suspicious symptoms, it’s a good idea to take another test just to be sure. I spoke to Liliana Willbert, an epidemiologist for the Washoe County Health District to get some clarity on how to get the most accurate results. She said it’s all about timing.

Sagrero: So, she recommends waiting around five days after being in contact with an infected person because it gives space for the viral load to develop to a point where that helps tests get a more accurate reading. The tests ultimately depend on a viral load being high enough to get an effective sample.

Billman: How can people get tested locally?

Sagrero: Washoe County is running four health sites managed by Northshore [Clinical] Labs. Then there’s the Washoe County Health District, which has community pop ups and a facility running at the Reno-Sparks Livestock Events Center. They just recently extended those hours into the afternoon and they’re open on Saturdays now. The Nevada National Guard was reactivated to help as well.

Just be sure to bring some form of legal identification that provides a name and an address. One challenge people are facing is that testing facilities are often operating during times when people are working.

There are also other places where community members who don’t have that kind of info ready, or have the time, could also access tests, like getting some from drugstores, but in this case that isn’t free, which could be a barrier for some, and they’re pretty tricky to come by. People from other countries who might not have the proper documentation can also enroll in their country’s consulate and get paperwork through there, which will provide all the information people need to apply for tests from governmental organizations.

Billman: Lucia, what are some of the ways the state and federal government are responding to the omicron surge?

Lucia Starbuck: Nevada ordered more than half a million antigen at-home tests. Those are slated to arrive this week and will be distributed to places within the community like libraries and welfare offices, according to the state. You can also order four at-home antigen tests from the federal government. Those started arriving last week, but it’s not too late to order yours at this website.

I do want to note, some argue four tests isn’t enough, especially for multi-generational households or folks who live with roommates.

Billman: So, those tests that are from the federal government will be antigen tests, but can you breakdown the different types of tests that are available?

Starbuck: There’s PCR tests; those results are sent to a lab where they look for genetic material of the virus. This type of test is super sensitive, so it can detect very low levels of the virus, but it might take a few days to get your results depending on the demand. There’s the rapid antigen testing that you can do at home. It’s not as sensitive, but you can get the results within minutes.

Due to the demand for testing that we’re seeing right now, health officials are saying to get whatever test you can.

Billman: Thanks for breaking that down. Can you help me understand some of the factors right now that are contributing to such a high demand?

Starbuck: There are more people getting sick and seeking testing due to the omicron surge. For example, last week Washoe County reported a seven-day average of more than 1,000 cases per day. I spoke with Brian Labus, he’s an infectious disease expert and professor at UNLV’s School of Public Health. He said there can be a delay in responding to surges.

“Our testing capacity changes over time. When things get really calm, and the numbers go down, testing sites close, and then when numbers start to go up again, we need to reopen those sites, but it doesn’t happen overnight,” Labus said.

And some of the testing sites that have popped up in response to the demand quickly became overwhelmed.

If you can’t find a test, and you are feeling sick, health officials are saying assume that you have COVID-19, or another illness, and stay home.

Lucia Starbuck is a corps member with Report for America, an initiative of the GroundTruth Project.