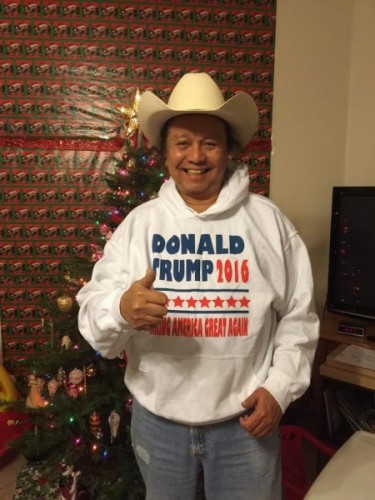 His name will appear on the Nevada primary ballot on June 14, 2016 as HAMILTON, Eddie “Trumblican”. As suggested, Hamilton is a self-identified super fan of Republican presidential candidate Donald Trump and hopes to be his “go-to guy” in the Senate if elected to the open seat.

Hamilton says Trump inspires him to develop innovative ways to make “America Great Again.” If elected, Hamilton would lower the age restriction for nightclubs in Nevada to 18.

“When I was growing up, I liked to go to clubs,” Hamilton said. “I liked to study also. It’s part of a complete life cycle; a complete way of life.”

Hamilton believes lowering the age for nightclubs would attract more young people to Nevada, which would create more revenue for the state.

Hamilton describes himself as a “constitution conservative” and says other candidates, such as Republican Joe Heck running against him, are part of the establishment.

“I’m anti-establishment,” Hamilton said, adding that the other candidates running for Senate are not actually interested in serving the public.

“They hang around just for the career, for the money,” Hamilton said. “They don’t have any courage to do the right thing because they want to get re-elected to do their job, so nothing ever gets done.”

Hamilton hopes to draw support from Trump supporters in the state as well.

“A lot of our supporters are new people to the movement. Hopefully they come out in droves,” he said.

Hamilton ran for Nevada Governor in 2014 but lost the Republican nomination in the primary.