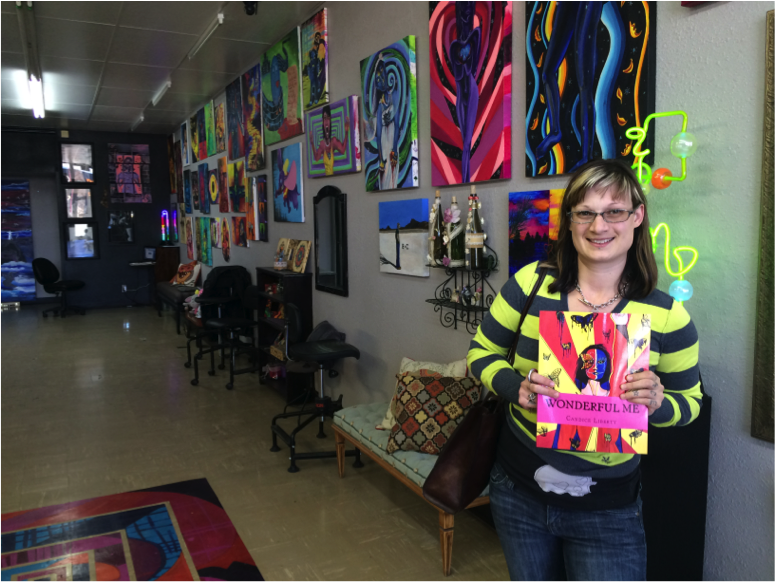 Art can be the perfect remedy to a broken heart, a dull mind, or in Candice Liberty’s case, a mental illness.

Liberty is the owner of Torn Arts Tattoo, Studio, & Gallery on South Wells Avenue. She recently published her autobiography, “Wonderful Me”, which showcases her original artwork, journal entries, and poems that Liberty wrote throughout her life to help gain self esteem and combat her bipolar disorder, a chronic mental illness that causes dramatic mood swings.

This isn’t just for people with metal illnesses; it’s for people who are lost and confused in life and don’t know what direction to head in,” said Liberty. “It’s just to help people with their own self esteem and in the end, it’s about loving yourself.”

The paintings that cover the walls of her tattoo parlor are both colorful and gruesome. One displays the popular Disney character Dumbo with half of the flesh of his face melting off, creating a zombified flying elephant.

One of her favorite paintings is of a scene inspired by the movie “Wizard of Oz”. It depicts the yellow brick road with Liberty lying on the side of it. At the end of the road is the Tin Man, guarding his heart, and in the foreground are black bats flying away, which Liberty created by painting her lips black and kissing the canvas. This, she said, symbolizes her love flying away from her as she is chained down by her broken heart.

Liberty plans on creating a trilogy and has already started working on the sequel, which will display more of her Tim Burtonesque style of artwork as well as more poems meant to encourage readers to love themselves.