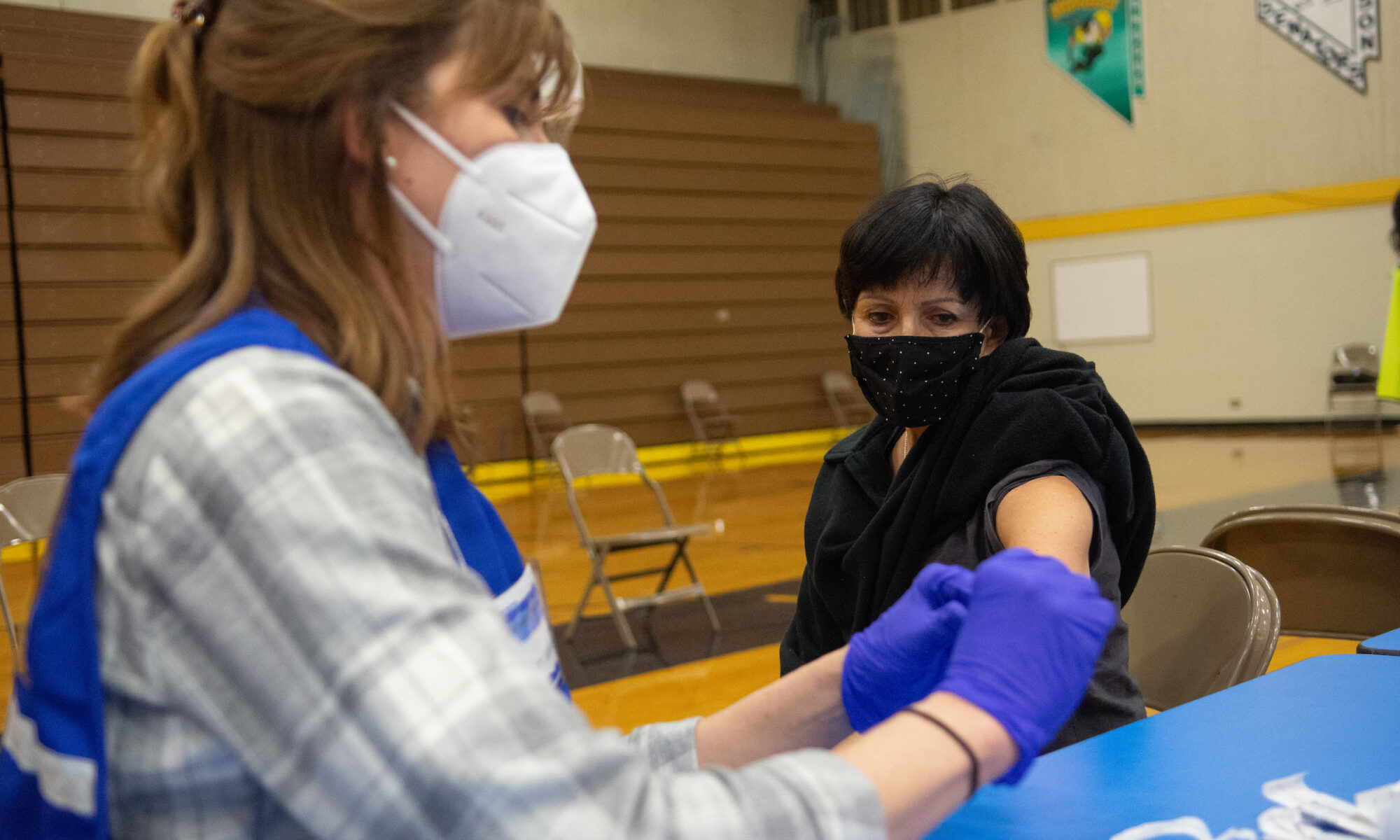 When Amy Camacho completed a vaccination interest survey through the Washoe County School District, she found herself answering yes to many questions.

Camacho, a fifth-grade teacher at Van Gorder Elementary School in Sparks, is a Type 1 diabetic and a double transplant recipient. Her doctors highly suggested she get the COVID-19 vaccine, but the 44-year-old said she’s “not here to take anybody’s place in line,” so she filled out the form and assumed her turn might not come until mid-February or March. But her wait was short.

She received an email offering a vaccination appointment and then her first dose on Jan. 23. Camacho described it as a “thrilling” moment.

“I have been given this gift of life,” she said, “and I’m going to protect it with everything I’ve got.”

Camacho was one of 377 school employees who received a dose that day at North Valleys High School, where the Reno-area district was operating a vaccine point-of-distribution (POD) center. It’s part of the school district’s plan to inoculate employees as efficiently as possible — a logistical feat that’s more complicated for the state’s two largest districts. The Washoe County School District has roughly 8,000 employees, making it the largest employer in Northern Nevada. The Clark County School District, meanwhile, has more than 40,000 employees.

Not all school staff members will opt for the vaccine. It’s not mandatory, though employees have shown strong interest in the vaccine, said Emily Ellison, the Washoe County School District’s chief human resources officer.

“I think people are very enthusiastic about it — just hopeful that, you know, this is a step in the right direction,” she said.

Nevada, like dozens of other states, has prioritized school employees for receiving the vaccine — a bid to keep schools open or reopen ones that have remained virtual. The process has been underway for several weeks in Nevada, particularly in rural areas. But the urban districts had to figure out how to accomplish this on a much larger scale.

In Washoe County, that has meant a three-pronged approach: vaccinating employees at district-run PODs or sending them to fire stations or to the county health district when those places have additional vaccines to administer, Ellison said.

The school district also prioritized employees based on factors such as health conditions, age and their jobs, Ellison said. For instance, employees working with severely disabled students who may not be able to wear masks were prioritized.

“That’s how we created the queue,” she said. “So every time we operate a POD, or we have appointments available through other sources, we send out invitations to schedule to the next people on the list.”

As of Tuesday, the district had offered a vaccine opportunity to 2,858 employees, Ellison said. The district expected to issue another 1,220 invites later in the week. About 80 percent of employees offered a vaccination appointment have been accepting.

The district’s plan, though, hasn’t eliminated some confusion surrounding the vaccine. Will Harper, a teacher at Spanish Springs High School, snagged a vaccine Jan. 13 after he and his wife registered on their own for an appointment at a Washoe County Health District-run event. The 51-year-old listed his occupation as a secondary school teacher.

“If they would have said, ‘You’re taking a shot from someone who is 65 or older or higher risk than you, do you really want to do this?,’ I probably would have said no,” Harper said. “But, again, it was made available.”

Harper said district officials later sent an email urging employees not to make their own appointments. But he stands by his decision.

Spanish Springs High School, where he and his wife work, closed for several days in November because of coronavirus exposures that created staffing shortages, Harper said. He doesn’t necessarily fear going to work each day but said he views the vaccine as a way to protect himself, his students and their families. Many of his students who are learning English as a second language live in multi-generational households, he said. Some have had parents or grandparents die after contracting COVID-19.

“I felt like a shot was far more protection for me and my students than soap and water and luck,” he said.

The Clark County School District sent employees an email Tuesday saying they could register for the vaccine online and would be contacted when they’re eligible to schedule an appointment at a POD hosted by the Nevada System of Higher Education. The message followed confusion last week after a flurry of memos that left some employees waiting to get a vaccine, only to be turned away.

A day after the latest vaccination memo, the Clark County School District announced it would be transitioning the youngest students to in-person learning starting March 1. The Clark County Education Association has called for the prioritization of staff members who would be returning to school buildings under the hybrid model.

Clark County Superintendent Jesus Jara and Clark County Commission Chair Marilyn Kirkpatrick said school employees involved in the hybrid reopening — including teachers, bus drivers, support staff, principals and others — would be prioritized to receive the vaccine. It’s unclear whether that prioritization would occur based on information employees provide while registering online or if that will be accomplished a different way.

“We have taken all of that into consideration to ensure that everybody that we need to ensure that school can open will have the opportunity to get their vaccine,” Kirkpatrick said.

For more information about the COVID-19 vaccination process in Nevada, please read the full article The latest logistical hurdle for large school districts? How to vaccinate thousands of workers (thenevadaindependent.com)

This story was produced by reporter Jackie Valley for The Nevada Independent and was originally published on February 1, 2021.