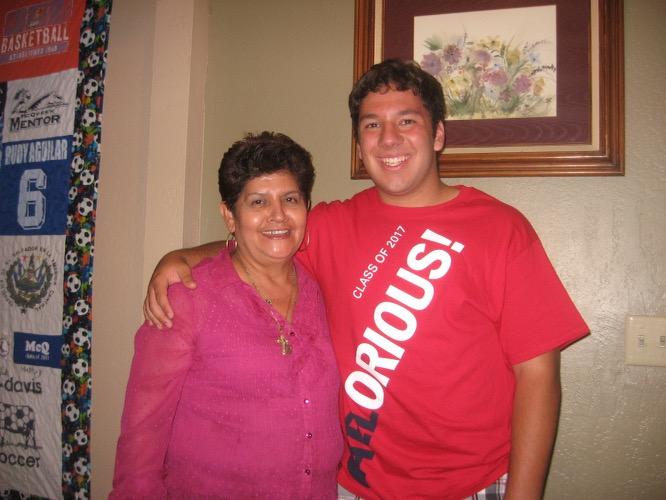 The COVID-19 pandemic has taken the lives of more than 20,000 people across the Mountain West. One of those people was Belarmina Martinez, a mother of eight and an aunt to nearly 20 nieces and nephews. She loved her family, food and dancing the most.

Rudy Aguilar, her nephew, used to call his Aunt Belarmina by her nickname, Tía Mina. She was the second oldest of 10 siblings. During family parties, the house was already packed even before friends showed up. Tía Mina met everyone at the door with fresh pupusas, which are handmade cornmeal patties stuffed with beans, pork and oozing cheese, a classic Salvadoran dish.

And when the cumbia or bachata started to blast through the speakers, Tía Mina was the first person on the dance floor – but dancing alone was never an option.

“She would take us each one at a time and try to get us, so we’d always joke, ‘Don’t make eye contact, Tía’s coming, Tía’s coming!’ and we would try to push each other out to go dance with her,” Rudy remembers.

He says that’s what he’ll miss most, the embarrassing moments he felt as a boy that slowly turned into tender moments as he grew up, realizing that a simple dance brought his Tía Mina so much joy.

“It brought back all the memories,” he says. “Obviously it’s a little tough because I know that’s not going to happen again.”

In the video, Rudy and Tía Mina are in the middle of the living room dance floor, two-stepping to the beat of “El Viejo del Sombrerón,” a song by La Sonora Dinamita, a Colombian music group, and family members are insisting they turn up the music.

He says Tía Mina’s love for dancing was rooted in her Central American culture. She immigrated to the U.S. in the ‘90s from El Salvador. She spent some time in Los Angeles and eventually moved to Reno, Nevada, where her younger brother Adolfo Aguilar, Rudy’s dad, was living.

Adolfo says his sister’s decision to make Reno her forever home was a blessing for their family.

“She took the responsibility of organizing the holiday parties,” he says.

Adolfo says Tía Mina was the reason why everyone got together every Christmas and New Year and for birthday parties, and it made sense because she played a motherly role in everyone’s life.

“She was like a mother to me and to our younger siblings because of how big the family was,” Adolfo says. “I remember that she wanted to teach me a lesson and was chasing me around. I ran and ran and climbed up a tall tree. She told me, ‘I’m not leaving until you come down.’ ”

Thinking back to this shared moment with his sister makes Adolfo laugh, but he also says times were hard back then. His older sister had to grow up fast to help raise their younger siblings.

Tía Mina would carry that role through her life. She was a stay-at-home mother who helped shape the lives of her grandkids and nieces and nephews, including Rudy.

“That’s the place that a lot of us would go when our parents were working and stuff and spend the day there, and she’d be taking care of us, cooking food and things like that,” Rudy says.

Tía Mina, who died in January, would have turned 67 this year. Adolfo says that his sister taught them what it means to be a family unit, and now it’s up to them to keep the family bond stronger than ever in her honor.

“I talked to my nieces and nephews, and I told them, ‘You know, she suffered a lot, and we have to keep in mind that she is now at rest in a better place,’ ” he says. “Knowing that she suffered so much and is finally resting, I feel a sense of peace.”

Adolfo wants his sister Tía Mina to be remembered as a luchona, a Spanish word of endearment for “fighter.”

This article was published by Stephanie Serrano on March 10, 2021, and shared with Noticiero Móvil.