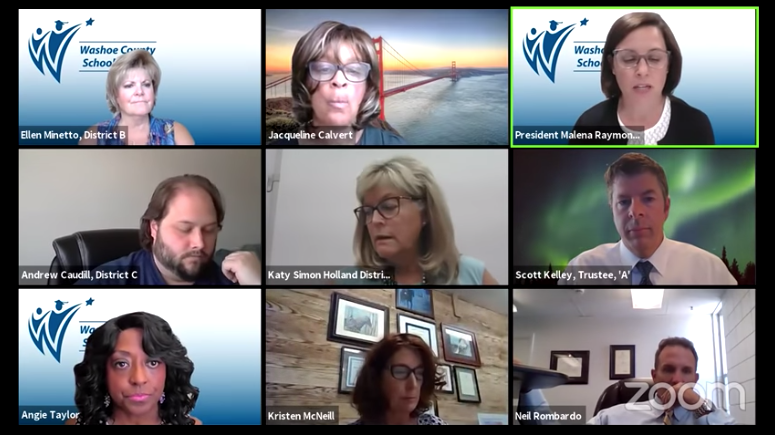 The Washoe County School District Board of Trustees met virtually on Tuesday, July 28, and decided to reopen schools this fall. WCSD via Zoom

A looming decision on whether or not the Washoe County School District Board of Trustees would honor their plans to return to in-person learning in the fall was determined late Tuesday night. Students, teachers and supporting staff will be going back to school in person this fall.

For weeks now, the Washoe County School District has been brainstorming the most effective way to reopen schools with plans for in-person and hybrid learning models. During a virtual board meeting on Tuesday, July 28, nearly 4,000 community members tuned in to the almost 10-hour conversation, which resulted in the trustees’ decision to reopen schools on August 17.

Moving forward, the trustees unanimously voted that elementary schools return to complete in-person learning. In a 6-to-1 vote, the trustees decided that both middle schools and high schools will participate in a hybrid model in which the students will rotate between A and B days, splitting their time with in-person and distance learning. The direction to reopen schools was supported by Governor Steve Sisolak, who released a statewide directive four hours into the board meeting, which included the scaling back of social distancing for elementary school students from 6 feet to 3 feet.

The decision came after Washoe County District Health Officer Kevin Dick recommended the school district not reopen schools, more than once, out of concern for increased COVID-19 cases in the county. Over the weekend, Washoe County reported a new daily high of 159 new cases on Saturday.

For Board President Malena Raymond, the decision to support in-person learning spreads farther than a public health crisis.

Masks will be required by anyone on school district campuses or buses, and sanitizing of high-contact surface areas will be heightened. The trustees emphasized that community members still have the choice of enrolling students in distance learning or online school, although the enrollment date for the recommended online school, North Star, is anticipated to close Friday.

This article is part of a collaboration with KUNR public radio. The original English version was written by Stephanie Serrano on July 29.